So, Anyway… by John Cleese 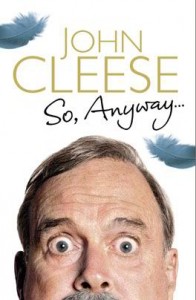 He starts with his childhood in World War II (his parents moved around a lot but ended up in Weston-super-Mare). I adore his description of the war: “The Germans were a people famous for their efficiency, so why would they drop perfectly good bombs on Weston-super-Mare, when there was nothing in Weston that a bomb could destroy that could possibly be as valuable as the bomb that destroyed it? That would mean that every explosion made a tiny dent in the German economy…”

The things I find most dull about most “celebrity” autobiographies (let’s be honest we want them to get to the bit where they can tell us stories about showbiz) are interesting if a little long in places here. He talks about his fragmented relationship with his mother, his father’s obsession with doing well in the British class system after he came back from India, then school, public school and eventually getting into Cambridge.

When he gets there he talks about Footlights extensively and how the 1963 revue “Cambridge Circus” was a turning point for him and the club itself. He went with it to the West End, New Zealand(!) and eventually to Broadway where he ended up in a production of Half A Sixpence with Tommy Steele and never looked back. He got the role even though he insists he couldn’t sing (he used to mime with the chorus).

There’s relatively little about his love life apart from meeting Connie Booth (later his co-writer and Polly in Fawlty Towers) in New York when he was on Broadway and she was a waitress. They lived there for a while, he went back to England and they tried long distance for a while, broke up, he went back to the UK heartbroken. The story of how they came to be married is quite lovely and happens very suddenly when he travels to New York just to see her while pretending he’s there on business.

The thing I identified with when it comes to my first experiences of Python is his relationship with The Goon Show. He talks about how he and his friends “adored it, and discussed it and swapped jokes from it” – the same experience my friends and I had (well the weird ones among us who watched a show that was 20 years old by the time we got to it) with Python.

He spends a lot of time fondly talking about David Frost. He was his major employer for many years as a writer and performer on TW3, The Frost Report etc. The “incestuousness” of these shows is staggering in places. Over the years he’s written and worked in different combinations with all the Pythons, Ronnies Barker and Corbett, all 3 Goodies, Marty Feldman…

However, after all the good stuff, here’s the rub – out of a 404 page book he only devotes 21 pages of it to Python and even then a chunk of that refers to the recent 02 gigs. The book stops dead in 1969 so you can only be left to presume that a second two volumes deal properly with Python TV and movies, Fawlty Towers, A Fish Called Wanda, broken marriages and beyond.

Genuinely very entertaining, I laughed quite a bit, he comes across as being cranky but not nasty. My liking it might tie in with my interest in comedy of the period, but you might feel a big aggrieved if you’d bought it expecting all Python and Fawlty Towers. I’ll definitely be reading the next two.

You can listen to the item on RTE Radio 1’s Arena HERE.