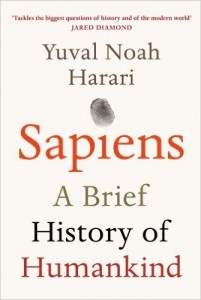 This one has jumped the queue ahead of a few other books that I’ve read recently as it demands to be reviewed immediately and you have to read it. Now.

I started Sapiens with the misconception that it was a book about the history of Homo sapiens and how we came about. It is, at least the start is, but quickly Harari lays waste to preconceptions I’ve had all my adult life. Written very much with mainstream audiences and non-scientists in mind he tells of the real history of a small ape-descended life form that exists at the same time as other similar ape-descended lifeforms (Neanderthals and the like) but eventually ends up being the only one left standing on the corner of the block.

Spoiler alert – we may have massacred all the other guys…

He then proceeds to pull the wizard’s curtain back and chart the entire course of the human race since, how we ended up with agriculture, capitalism, religion, consumerism and science and where we might be headed in centuries to come. I can’t tell you the number of pages I have turned down in my copy and the number of times I stopped dead in my tracks while reading to appreciate just how a part of my perception of the history, present and future of the human race had changed at that exact moment. Some of it is breathtaking.

All in all Sapiens if probably the best non-fiction book I’ve read in years and years. It’s preconception-altering, vastly readable for the layperson and may even change the way you view the entire world.