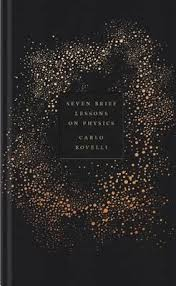 As I might have mentioned when I started rattling on about how many books I was going to read this year, I’m also making a conscious effort too read more non-fiction. I used to be great at it (there were whole years when the vast majority of everything that traipsed around with me in my bag was sociology, politics, history, film or science based) but particularly in the last 12 months or so I’ve had so much interesting, readable and just extraordinary fiction coming my way that “fact” sort of fell by the wayside…

This was a great place to start again in 2016 for two reasons – firstly I’ve always had a huge amateur interest in science (particularly astronomy and physics) and secondly this book has become a huge seller on the back of taking something extraordinarily complicated and almost impossible to explain to the layman and then trying to do just that.

Originally a series from an Italian Sunday newspaper, it’s 79 wonderful pages taking you all the way from the very, very small of quantum physics to the very, very vast of the actual architecture of the Universe (explained in 8 pages, a third of which are pictures!).

This is mind-boggling tales of reality for anyone who’s ever boggled at a black hole or wondered just what in the name of Hawking that messing about in the Large Hadron Collider is all about. Yes, it’s just a tiny skim across the surface of a hugely complicated subject, but if you’re interested in devouring the all-encompassing subject that physics can be, this might be just the amouse bouche you need.