The Reason I Jump by Naoki Higashida 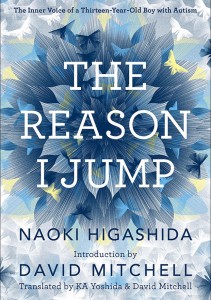 This one came across my radar when I saw David Mitchell (author of the dazzling Cloud Atlas) on The Daily Show last year talking about the translation he’d just been involved with of a book by a Japanese boy with autism who had learned to communicate and then write about his feeling using a character grid his mother had helped him make.

Some of the ideas expressed in here are exceptional for any 13-year-old and head-opening for those of us who don’t have to deal with what Naoki Higashida and millions of others with autism do every day.

It’s both a partial “how to interact with me” manual and a borderline philosophical look at how he interacts with the world and others and why he thinks he does both of those things in the way he does.

Again, it’s a slight enough book but if you’ve ever wanted to get inside the head of someone with autism trying to express themselves in the world, this is where you start.