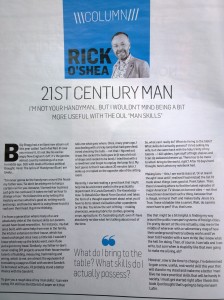 Billy Bragg had a brilliant new album out this year called Tooth And Nail; in case you missed it. It’s not like his earlier, angry “New England” stuff, it’s the gentler almost country ramblings of a man in middle age. Still with loads of furious political thought, mind. The lyrics of Handyman Blues are lovely…

“I’m never gonna be the handyman around the house my father was / So don’t be asking me to hang a curtain rail for you, because / Screwdriver business just gets me confused / It takes me half an hour to change a fuse.” He follows this on by telling her what he’s good at, writing words and songs, and how his talent is using those to put a roof over their head. It got me thinking.

I’m from a generation many of whom are absolutely shite at the manual skills their parents would have found necessities.  For instance, my dad once built, with some help from men in the family, the kitchen extension to their house which has stood, unchanged, since I was a little kid. I wouldn’t know which way up the bricks went even if you put a gun to my head. Similarly my father-in-law’s never-ending DIY projects around their house involve talents of building, measuring, hammering and wiring which to me  are almost the equivalent of translating a papyrus filled with ancient Sanskrit. To be honest with you I’d probably stand a better chance with the Sanskrit.

To give you a rough idea of my manskills – I can wire a plug. If it still has the little bit of paper on it that tells me what goes where. Once, many years ago, I was dealing with a tricky lamp that had gone dead. I tried checking the bulb, not that, figured out it was the socket the bulb goes in (it was a bit out of shape and needed to be bent). I tried that with a screwdriver and forgot to unplug the lamp first. My best guess is that it was about 20 minutes later I woke up crumpled on the opposite side of the sitting room.

Recently I started reading a great book that might help me be a bit more useful in the practicality department recently. It’s Lewis Dartnell’s “The Knowledge – How To Rebuild Our World From Scratch” and takes the form of a thought experiment about what you’d have to do to reboot civilisation after a pandemic or the like. You know the sort of thing – making chemicals, weaving fabric for clothes, growing crops, agriculture. It’s fascinating stuff even if I have absolutely no idea what he’s talking about most of the time.

So what can I really do? What do I bring to the table? What skills do I actually have? I tried asking my wife but she came back with the holy trinity of my talents – I kill spiders, I get stuff off high shelves and I can zip awkward dresses up. There has to be more to what I bring to the world, right? After ten days hard thought here’s what my notebook had.

Making lists – this I am world class at. Or at least I thought I was until I realised I had mislaid the list I’d made about things I was good at. Point taken. Then there’s knowing where to find the latest episodes of major American TV shows on torrent sites – not that I would ever download such a thing because that is illegal, immoral, theft and makes baby Jesus cry. True, I have a bladder like a camel. Wait, do camels never have to pee? If so, that’s me.

One that might be a bit helpful is finding my way around the public transport systems of foreign cities. I’m pretty decent at this one actually; slap me in the middle of wherever with a rudimentary map of how their Underground/Metro/Subway works and I’ve been told I wander with a sure stride like I know what the hell I’m doing. Then, of course, I can talk and I can write – but sure when is stupidity like that ever going to make me a living, eh?

However, now is the time to change. I’m determined to gain a new, useful, real-world skill this year that will stand in my stead and make me a better “man”. Give me more practical skills that will be handy in society. I must get started right after I finish this book I just bought that’s going to help me learn Latin.