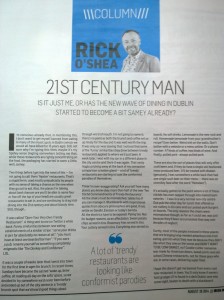 I’m conscious already in mentioning what I’m about to write that I don’t want to get myself banned from eating in many of the nicest spots in Dublin for adventure, new stuff and foodie delights that we would all have killed for 15 years ago. Still not sure why I’m typing this then, maybe it’s my Spidey-sense tingling somewhere telling me that, while these restaurants are rightly concentrating on the food, the packaging has started to seem a little, well, samey.

Two things before I get into the meat of this particular pan-seared column – I’m not going to call them “hipster” restaurants. That’s a stupid term used mostly prejudicially by people with no sense of taking a chance on the new when they go out to eat. Also the places I’m talking about below (and chances are you’ll be able to name 4 or 5 off the top of your head) are usually great restaurants to eat in and are continuing to drag Irish dining into the 21st century and about bloody time. Still, though…

It was called “Open Your Very Own Trendy Restaurant”. A thing sent to me on twitter a while back. Funny similarities between new eating establishments of a similar stripe. “Serve your drinks in jars for absolutely no reason at all”, “You must have at least one bearded barman, “If you were a pub rename yourself as something completely enigmatic like ‘The Donkey And Confidence’”

It was a couple of weeks later I went into town for the first time in ages for brunch. In recent times Sundays have become the sacred “wake up, brew coffee, sit reading all day on the sofa” space, so we decided to try somewhere we’d never been before and ended up out of the city centre in a ”trendy” brunch spot that we’d heard good things about through word of mouth. I’m not going to name it; there’s no point as both the brunch and coffee set us up nicely for the day and it was well worth the trip.

It was only as I was leaving that I noticed that some of the “funny” similarities they drew between trendy restaurants applied to where we’d just been. A week later I was with my son in a different place in the city centre and there it was again. That nasty niggle pricking away at the back of my overactive comparison-creation gland – a lot of “trendy” restaurants are starting to look like conformist parodies of themselves.

Think I’m overexaggerating a bit? Ask yourself how many places you know obey more than half of the new Ten Cliché Commandments of Trendy Restaurants:

All the chairs must be mismatched, tables too if you can manage it.

Blackboards with inspirational quotes from obscure philosophers are good, if not, settle on Gandhi, Einstein or today’s barista.

All the electrics have to be exposed. Piping too. Not for budget reasons, as an affectation.

Everything else served on boards. No, wait, mismatched boards…

No soft drinks. Lemonade if the new rock and roll. Homemade lemonade from your grandmother’s recipe? Even better.

Weird shit on the walls.

Don’t bother with a website or a menu online. Or a phone number.

These are also the sort of places that will only offer craft beers and, if they do have a single old-fashioned mass produced beer, it’ll be treated with disdain (genuinely, I was somewhere a while back that had one single such beer on their menu – there was an unsmiley face after the word “Heineken”). However as you will know if you’ve read me here before that’s a brilliant thing, I highly encourage it happening everywhere and long may it continue.

Hey, it’s my column, I’m allowed to be a little bit of a hypocrite from time to time…

It’s actually gotten to the point where a lot of these clichés has even seeped through into mainstream eateries – I was in a very normal non-city centre Dub pub the other day for lunch that offered us our cutlery in tin cans and our pulled pork burgers on boards. The only reasons the chairs were mismatched though as far as I could see was just because they’d been accumulated that way over decades of neglect.

I suppose if I was talking about new chippers or Italian restaurants or traditional fine dining emporia this wouldn’t sit so weirdly with me, but surely most of the people involved in these places that are bringing long-needed adventures into Irish eating got into what they now do in the first place because they didn’t like what they saw on the scene and DIDN’T WANT TO BE CONFORMIST, no?

Cookie-cutter nonsense was made for American diners, kebab joints and old-school Chinese restaurants, not for these guys who are, in some cases, delivering super food that’s making it a pleasure to experiment in new places when they open.

I hope this doesn’t get me banned from every cool new restaurant in town. You’ll only know if owners hold grudges if I’m found in a dark Dublin laneway some night, beaten to death with a blackboard.

Originally appeared in the Insider Magazine in the Irish Independent.