Finally managed to get my PC/phone hookup working again after re-installing the Nokia software so a couple of things from the debs show we did a week last Friday.

It came at the end of the week after we’d discovered the show was being taken off so you might imagine that going out into Studio 1 in the radio building (an auditorium about the size of a basketball arena done up like a debs night!) in front of 20 tables of competition winners, their guests, our invited celebrity guests, sponsors etc. would be the last thing anyone would want to do… Particularly when we had to dress up in full debs regalia… You don’t really know me very well, do you? 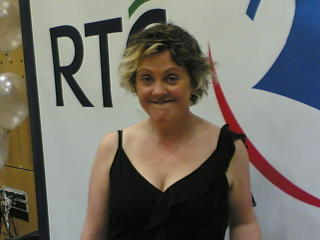 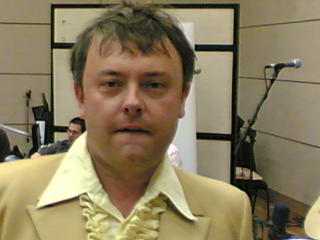 The shirt is courtesy of the RTE costume department as is the jacket – the one Gerry Ryan presented the 1994 Eurovision Song Contest in…. It hasn’t aged well…

The energy you can feed off from an audience like that makes me understand in some small way how stand-ups and chat show hosts do thier work and by God it’s fun! The crowd were great, all in their absolute finest along with one “couple” in debs fancy dress and two different sets of couples who had come straight to RTE from their own debs the night before in Wexford and Monaghan. 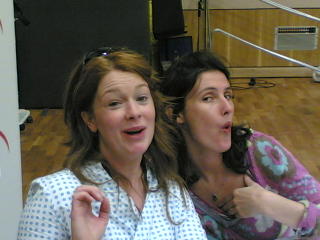 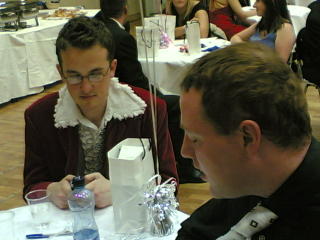 I did ever so slightly regret my get up though when they hauled us outside the radio building afterwards to get our piccies taken in a classic American convertible car, shots that did appear in the paper a couple of days later. The jacket was funny on the radio – not in the Herald.

As for this week it was really interesting to be producing Untitled on Wednesday with David and Clare. It’s a very healthy experience to step out of your own world and take the reins of a different project; to realise that somebody else’s show must go on.

We’re now on Itunes, yay! Go to podcasts, search for Untitled and there you are… Those who know these things tell me there are 10,000 people downloading it every week (I’m absolutely sure that’s more people than hear in on the various radio stations around the country given the late hour it usually goes out at).

Aside from that this week Ruth and I recorded a piece for Dustin’s new kids show that should be a laugh, I’ve been over in kids tv chatting about a pilot (rest easy gentle reader it won’t involve me being on screen and it won’t involve me making a fool of myself!) and just as the week ended I got the loveliest e-mail from Ryan Tubridy that almost made me cry in the office…

Tomorrow is the start of a totally new experience for me as, for the last two weeks of the show, I’ll be presenting on my own. The 5 and a half months or so that I’ve been presenting with Ruth have been the most professionally fulfilling, exciting and just best ever. From tomorrow it’s going to be like trying to box with one arm tied behind my back but that’s something I’ll have to get used to 🙂 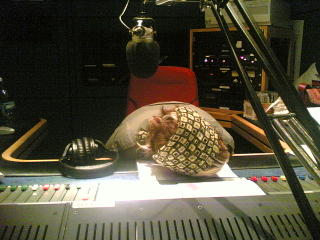