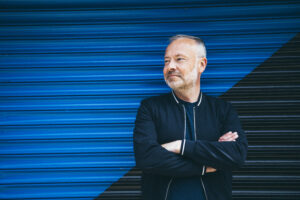 Rick has been a radio presenter with RTE since 2001; prior to 2017 on RTE 2FM and since then presenting weekday mornings and jazz show The Gold Lounge on RTE Gold.

He is also a previous presenter of The Book Show and The Poetry Programme, both on RTE Radio 1.

He has been literary curator at the UCD Festival since 2020 and was curator for the Waterford Writers Weekend in 2017 and 2018.

Outside the book world Rick has presented awards ceremonies, corporate events and launches for clients including Diageo, Samsung and Microsoft.

He has had epilepsy since he was 16 and has been the National Patron of Epilepsy Ireland since 2006 both fundraising for the organisation and raising awareness of the condition including on The Late Late Show as a guest with Joe Schmidt.

Rick has been a speaker at international conferences on epilepsy in Montreal, Malta and Marseille as well as at the European Parliament in Brussels and on the use of social media in radio at Radiodays Europe.

In 2012 he won the so far only ever Irish series of Celebrity Mastermind. It is the thing he is most proud of in his professional life and he doesn’t mind you knowing that.