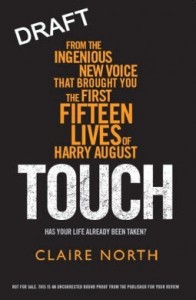 You might remember earlier this year me raving about The First Fifteen Lives Of Harry August, I didn’t think we’d have a second novel from Claire North so quickly and frankly I’m incredibly glad we do.

Touch hooks you in just the same way Harry August did but in an entirely different world that’s no less thrilling. Our narrator is a person (spirit/being??) who can jump from person to person with touch and has been doing so for centuries (the host body remembers nothing of the time they’ve been taken over whether it’s 30 seconds or 30 years). He/she is being hunted, someone is trying to shoot he/she dead on the first page of the book in a crowded Taksim Station in Istanbul. Go.

Just like last time I’m not giving you any spoilers beyond this shy to say that Touch is fast, smart, cinematic and with a cracking central idea. This is absolutely destined to be one of the biggest thrillers of 2015. Makes you think a bit about what it means to inhabit a human body too. A very, very impressive second outing.

Sadly, for you anyway, Touch won’t be out in shops until the end of February 2015.