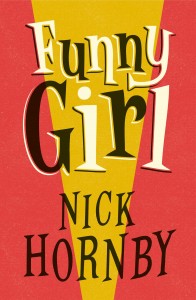 I read Nick Hornby for years, all the way from Fever Pitch and High Fidelity through About A Boy and right until I gave up after not finishing A Long Way Down in 2005. Everyone deserves a second chance, right?

It opens well with Barbara Parker being crowned Miss Blackpool in 1964 and realising just as the crown touches her head that the last thing she wants to do is be a beauty queen so she quits on the spot. She adores Lucille Ball, wants to be in a comedy on TV and decides to go to London to try to escape her background and follow her dream. Working the weeks away in a department store she gets approached by an agent one night while in a club. He wants her to try out for the many “lovely girl in a bikini showing off prizes on a game show” roles on TV but she just wants to be funny.

Eventually she persists and with a brand new name (Sophie Straw) walks into an audition with 2 writers, a producer and they rewrite the (average) show they had planned just for her. Barbara (And Jim) becomes the most popular comedy on TV for the first series or two and the rest of the story takes us through her coping with being a normal working class girl in a life of fame and the love of strangers, the lives of the two writers (one of whom is gay in a Britain in which homosexuality is still an imprisonable offence) and eventually finishing in a reunion of the cast and makers 50 years later.

It’s an average book at best (you should be careful about setting up your book with the title “Funny Girl” if there are only a couple of laughs in it) and feels almost like a 4 part BBC Series itself in the making. If you’re looking for funny in Funny Girl you won’t find it, there are a few laughs. It gets dull in the middle and, like the TV show it charts the life of, outstays its welcome. I’ve read much, much better this year.

It seems to be getting very positive reviews from almost everyone, just that I’m not one of them.