Command And Control by Eric Schlosser 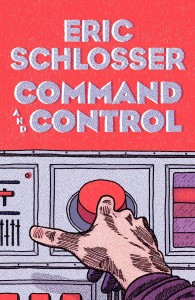 Command And Control by Eric Schlosser is actually 2 books, one I liked very much and one I ended up skimming over.

The first is a history of the atomic bomb and, more specifically, how the United States developed it, used it, misused it and how astonishing it is that there wasn’t a major accident involving one of them at some point since 1945.

The other, intercut with it, history of a specific incident in 1980 in Damascus, Arkansas. Fascinating in itself but told with such over-painstaking detail (we know childhood stories and hair colour of minor characters) that after the second or third chapter devoted to it I actually got bored and skimmed. This doesn’t happen often with me.

Having said that, don’t let it put you off the other 2/3 of the book. I found out a huge amount of stuff I had no idea about with regards to how America (and to a lesser extent the world) dealt with the development of nuclear weapons, the progress of the Cold War and the arms race that became part of it. Some of it genuinely boggling stuff (nuclear mines and anti-aircraft nuclear weapons, anyone?)

If you grew up during the Cold War and like history it’ll probably fascinate you. I wonder how people younger than that feel?