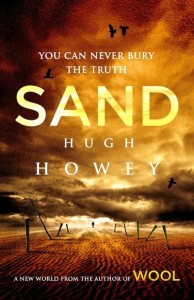 And here’s the point where I’m pretty sure I’m going to read whatever Hugh Howey writes for as long as he keeps writing.

You might remember my slightly breathless review of Wool last year (I liked it so much I wrote a review even though I didn’t really review books at the time!) and the sequels Shift and Dust just reinforced him as someone who writes incredibly readable wide-appeal SF with beautiful visual touches and new ideas.

This just furthers that impression.

Here we’re in a future America where people live on shifting sands that have covered the country. There are rich and poor but everyone ekes a living, scavenging artefacts of the old world and precious water from beneath the sands.

He does what he did in the Wool trilogy – he writes character really well and his imaginings of how the divers use their cobbled together tech to dive beneath dunes as easily as you would beneath the ocean are vivid and cinematic.

My only disappointment is that I could have done with more (how often do you say that?!?) I could have sworn that, leading up to the last quarter of the book, there was a bigger world to be explored and a sequel being set up; it all ends a bit suddenly.

A good complaint that one normally doesn’t have.

Overall it’s a fantastic piece of SF from an author I’m absolutely sure I’m going to be reading for a long, long time to come.