The Grass Is Singing by Doris Lessing 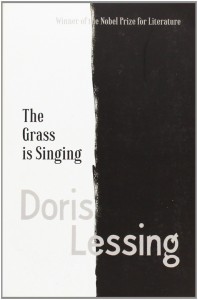 This was part of my early 2014 project to read something by authors I had never read and thought I should have (Dickens, Burgess, Coupland, Amis).

It’s set in Rhodesia in the 40s – Mary is a girl about town who’s almost old enough to be considered a spinster until Dick (a failing farmer a little older than her) asks her to marry him and takes her away to live in the veldt miles away from civilisation. I’m not revealing anything (it’s on the first page) that she’s found dead on the steps of their home one day, their servant is blamed and the story starts from the beginning to slowly reveal what happened.

No, it’s not a whodunnit, more of a gentle meditation on the nature of poor white farmers in that part of Africa at the time, race relations, relationships, pride, stupidity and many beautiful descriptions of the land, the seasons and their world.

Slow-moving, so not for everyone, but beautiful in places all the same and gently hypnotic in others.