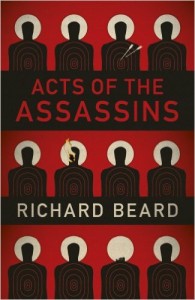 I hate to say that this is one that came in earlier in 2015 and that I shamefully skimmed over the blurb of. I’ve said it here before but finding a great thriller is such a rare thing for me that I tend to skim over the blurb and if I don’t feel immediately engaged…

Then I heard Declan Burke reviewing his best crime books of the year on Arena and immediately his explanation of what this was actually about made me dig it out from under the piles in the sub-TBR shelf. I’m so glad I did.

A cult leader in the Middle East has died in mysterious circumstances and now, one by one, his followers are all being dispatched in increasingly gruesome fashion. Our investigator arrives in from Europe to his old patch to try to find out just what they can do to stop the killings, if anything.

The cult leader is Jesus, the followers are disciples and the investigator is Roman. Interested yet?

Add into that the novel taking place in a completely unique universe where the Roman Empire is at the height of its powers, Christianity is spreading like a virus but yet modern-day technology (planes, mobile phones, DNA evidence) exists in ancient Israel and now I bet you’re all but hooked. I was.

Acts Of The Assassins is a genuinely wonderful stand-out thriller that rattles along with clever parallels being drawn about the attempted influence of western powers in the same part of the world 21st century.