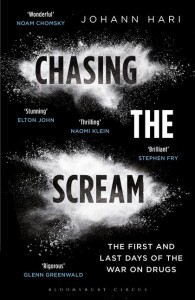 We view the world through a frame whether we realise it or not. All of us.

It took me a long time growing up to realise that and it only really happened when, every now and then, a book came along that nudged the frame off-centre ever so slightly. Every time, afterwards, world looked different forever.

It happened with stuff like No Logo, The Tipping Point, Black Swan, Freakonomics, anything I’ve ever read by John Pilger or Noam Chomsky. It has happened hugely here.

Like everyone else, I thought I had a fairly decent handle on the idea of the “war on drugs” – origins, effects, goods, bads, facts, figures. What Hari sets out to do in this book is both uncover the actual history of how it started, question the nature of our perception of addiction and ask just how beneficial total prohibition is it in the 21st century. He starts by taking on the histories of Harry Anslinger, the first head of the Federal Bureau of Narcotics, the legendary Billie Holiday and Arnold Rothstein, the mob kingpin who ran drug and booze networks in the 1920s.

Later he brings to light stories of addicts, people who have spent lifetimes helping them and presidents who are changing how the world works with regard to this. It’s head-opening stuff from the big pictures of countries, global cartels and long wars to the smallest of stories of people who got caught up in the crossfire on the ground both as providers and addicts.

It’s page-turning stuff in places, genuinely unbelievable in others (his notes at the end are so solid and extensive though), ends up questioning whether the world is on the verge of abandoning the “war on drugs” permanently and asks what happens next.

Like everyone I came into this with mostly cast-iron beliefs in this field, I leave it with radically different ones and many more questions. I don’t have anything to say as to whether or not he’s “right” here, I do think you should read this, make your mind up for yourself and then ask your own questions.

This could end up being one of “those” books that changes how you look at the world.