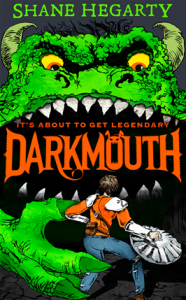 Disclaimer – I know Shane, mostly just through online, but we’ve met a few times. Further disclosure – this makes it harder to review someone’s book just in case it’s crap, or just average, so you put it off sometimes.

Finn’s dad is a legend hunter and the town they live in is the last place on Earth the legends appear. At any moment Minotaurs, Basilisks or the like could pop through a hole in the Universe and trash the place and Finn is in training to continue the long line of protectors his dad is part of. Problem being, Finn is crap at it. Mostly.

From fairly early on this has “series” written all over it. Mythology building, the start of a huge story arc, great characters, fun and a nice sense of humour. There’s a smidge of Harry Potter, a dash of Douglas Adams, a whiff of Buffy. Get a copy, give it to a kid you know who loves reading – I think any age from 8 or so upwards (that doesn’t preclude you as an adult enjoying it either, I did!)

Mine was an early proof copy without the illustrations, I can only presume they add to it.