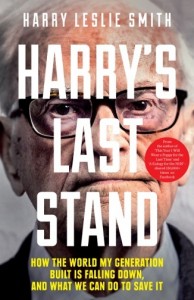 This one is somewhat of an oddity in the many, many books I’ve read about the world today and what the hell is going wrong.

Harry Leslie Smith is a 91-year-old who grew up in incredible poverty in Barnsley during the Great Depression, fought in World War II and now has taken to writing about how he sees the contract that was promised to his generation after 1945 (greater social equality, free healthcare, the social safety net) has been eroded so far that, quite literally, he’s as mad as hell and he’s not going to take it anymore.

No he’s not a lifelong journalist, commentator or author, just a “civilian” who, after a life selling oriental carpets and following the death of his wife in 1999, took up writing. Since then he’s written impassioned and very popular columns for The Guardian and three books of memoir. In Harry’s Last Stand he admits he may soon be just a picture on someone’s sideboard and a memory, but he wants to go down swinging for the rest of us.

Yes, it would be all to easy for him to fall into a trap of sounding like Grandpa Simpson, railing on about how things used to be so much better and how today we don’t appreciate any of it. Instead he points out just how bad things once were and how we’re sliding back into a time resembling one he thought the human race would never have to live through again.

It does read like a long, impassioned plea for the dignity of people, equality for the 99%, tolerance, and his fear that corporations of today are treating workers no differently that “the toffs” who ran the mines did when he was a kid.

Seek this one out. If it doesn’t make you angry there’s something wrong with you. It’s inspirational stuff.