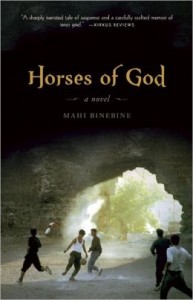 One of those that didn’t win this year’s IMPAC it’s a small story of normal people involved in something huge.

Fuad, Yachine, Ali and Nabil all come from Sidi Moumen, one of the poorest slums in Casablanca. Their football team is part what marks them out from everyone else in the other slums and part gang, of sorts, for banding together and fighting other young lads.

Yachine narrates all from the afterlife as you realise fairly quickly that these impossibly poor kids slowly find themselves becoming a team of suicide bombers in the run up to the real life Casablanca bombings of 2003.

That’s the strength of the book – all too often people in the west wring their hands and wonder how it’s possible that young men like this can be “brainwashed” into committing unspeakable acts of violence against their fellow human beings. Here he shows how easy it is to become involved in something like this when you have absolutely nothing to lose and the promise of riches in the next life are dangled in front of you.

It’s a little older than the IMPAC list would give it credit (as sometimes happens with the quirks of these things) as it’s been out since 2010 and there’s  already a movie version.

Interesting, illuminating, but not something I’d go back to.