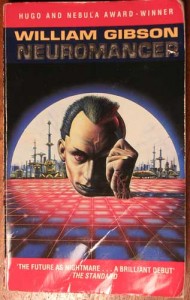 Here’s another one I feel a great shame about.

Despite being a reader of SF since I was a kid I’ve always had my blind spots. Many of them I’ve been trying to redress over the last 2 years (Philip K. Dick, Iain M. Banks. Margaret Atwood, even bloody J.G. Ballard!) and now finally I’ve made it here, to the novel that made the word “cyberspace” a thing. In 1984.

There’s no point in me attempting to explain the plot shy of telling you that Case is a hustler “hacker” who plugs into a vast, global dataspace matrix and that this is, essentially, a sprawling futuristic heist book. It’s also one of the most thrilling things I’ve ever read.

His language is fluid and beautiful in places, his view of the future still fairly plausible over 30 years later (how often can you say that about a writer?) and his plotting swift and crackling.

With this I feel like I’ve opened up yet another door to a writer whose stuff I’m going to work my way through over time.

Complex, techspeak heavy, but brilliant stuff. Thank christ no-one made a crap film of it.

One thought on “Book Review – Neuromancer by William Gibson”