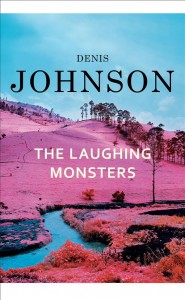 I’m a smidge ashamed to admit I’m new to Denis Johnson and that a huge part in my decision to read this was the glorious cover photo from Richard Mosse’s The Enclave exhibition. Glad I did.

Ronald Nair is a shady Scandinavian obviously ex-intelligence services operative drawn back to Freetown by an African former friend/colleague/associate Michael Adriko. Michael has a plan for a heist and a new fiancée. I don;t want to reveal any more as usual.

I’ve read a fair few reviews online of people taking this far too seriously or presuming Johnson should be writing far more seriously. Read it on the top and it’s a swift, occasionally vicious sometimes nonsensical trawl across half of Africa in what feels like the dying days of an empire.

As someone who’s never been to West Africa it nonetheless feels impossibly evocative of time, place, people, resources. It’s was worth it for me ever just for that. There’s more than a hint of a far more extreme version of Graham Greene’s The Quiet American here. Still well worth your time, though.

One thought on “Book Review – The Laughing Monsters by Denis Johnson”