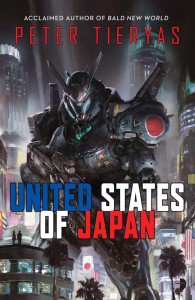 It’s one of the better work tropes of this part of the world in recent times – what if the Axis powers had won the second world war? More specifically, what if Japan was the ruler of America decades later and, in a setting not dissimilar to Philip K. Dick’s legendary The Man In The High Castle, life went on? It in, Beniko Ishimura is a government censor of video games, there’s a new, unapproved one in which the USA won the war and it may be part of a bigger conspiracy that threatens Japanese rule there.

It’s depiction of America in the latter 20th century under Japanese rule is great and very well thought out (look, anything that involves giant mecha is a winner in my book) and the alternate technologies that exist, some of them decades ahead of their time are quite cool. Aside from the flashy baubles the rest of the book is solid, whips along apace and gives you the daily reality of what it must be to live in a society like that well.

If it does have one thing letting it down it’s the premise itself. Unfortunately when you set yourself up in a world so similar in concept to one of the best known classics of alternate history SF, you’re always going to be compared to it.

Still, if you like your alt-histories this one is well worth a go.