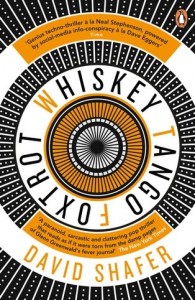 For most of David Shafer’s Whiskey Tango Foxtrot I was sold. He creates a global conspiracy driven by high capital and tech giants to privatise the information. All of it. And then sell it back to us at a premium thus, in essence, controlling the world in that Corporatocracy way most of us believe has been happening for decades.

We fall into the story through Leila, an NGO worker who comes across something she’s not supposed to see in the jungles of Myanmar, Mark, a globally famous self-empowerment guru who’s on the verge of a nervous breakdown and Leo, the token conspiracy theory nut who seems to have inadvertently stumbled onto a bizarre, impossible truth.

First the positives – he writes cracking, flawed characters really well. The whole overarching story is worryingly just one step ahead of plausible and I was eating it up for most of the duration of the book (aside from my thoughts the book was feted as one of the best of 2014 by newspapers, publications and reviewers from all over the world right from beginning to end).

And sadly, for me, therein lies the real problem – the ending. The book, after spending so long setting up such great characters and weaving them into a breakneck middle-third act just… wanders off into the sunset. Some reviewers have had no problem with this but call me old-fashioned – when I’ve invested this much time in a narrative I like to think it has a beginning, middle and ending.

Don’t get me wrong, if I hadn’t liked so much of what had gone before I probably wouldn’t have cared so much about the unresolved narrative and where the characters ended up. As it was, I was genuinely angry…

Top stuff, right up until the (lack of) end.