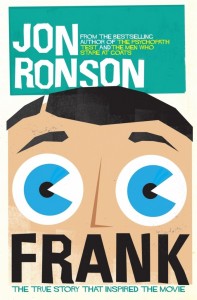 Less a book, more a genuinely fascinating long article about Jon Ronson and his time playing keyboard in Frank Sidebottom’s band, a call he gets from Frank years later and then the writing of the movie itself.

It is short, but it’s only 9 quid so that’s fair enough.

In it he talks about a much longer biography of Frank that’s being written. I’d be well up for that…