Like the Google banner today – celebrating the birthday of Louis Braille:

I know I’m a little behind the posse here but it’s been a while since I made it out to the cinema and thus I’m only catching up with King Kong tonight…. Glad that it’s everything everyone made it out to be; well told, well acted, sweeping, fun, feckin’ scary (and I mean genuinely scary – the way Andy Serkis meets his maker is truly vile) and fairly rattles along even with a three hour running time and an intermission!

I was actually physically sitting on the edge of my seat with jaw fully dropped during the 3 T-Rex/Kong fight and genuinely vertiginous, excited and then moved when he’s on top of the Chrysler building. 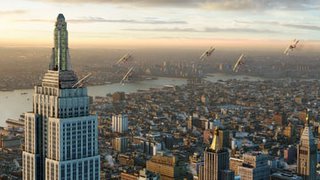 I had read a few complaints about the hour or so of preamble before the ship makes it to Skull Island but I thought establishing the characters very firmly in the real world (Ann is an out of work actress after her theatre shuts during the depression, thus making her vulnerable to Denham’s unorthodox offer of work) only made the fantasy elements stand out all the more.

WETA have done a stand up job (did we expect anything less?) on Kong, the island, the other creatures and a truly beautiful 1930s New York skyline… Put that in your hat and….. well, wear it George Lucas.

It’s a truly worthy follow on to the Rings series although he’s now in pre-production on the book I’m reading (The Lovely Bones) which is an altogether more intimate and subtle project (it’s truly gripping btw – haven’t put it down since I started it, another case where all your friends are right).

Turns out there’s a snowball’s chance in hell for anyone to get a ticket for Noam Chomsky’s appearance in Dublin 2 weeks from today… Let me slightly clarify what i wrote earlier:

If anyone can get me a ticket there are riches beyond your wildest dreams awaiting you!!!! (Well a couple of cds from the prize cabinet and any gig tickets I can scrounge too…)