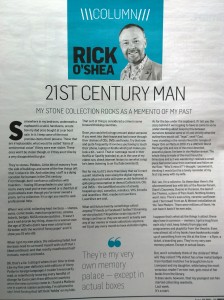 Somewhere in my bedroom, underneath a cupboard is a solid, handsome ornate box my dad once bought at a car boot sale. In it, I keep some of the most precious items that I possess. Those that are irreplaceable, what would be called “items of sentimental value” if they were ever stolen. These ones won’t be stolen though, or if they are it’ll be by a very disappointed burglar.

They’re stones. Pebbles. Little bits of masonry from the side of buildings and some of the few things left that I collect in life. And collecting “stuff” is a dying vocation for humans in the 21st century.

First though, don’t confuse us collectors with hoarders – having 18 lampshades in your spare room, every coat you’ve ever owned or a shed full of prams wheels even though you’ve never owned a pram isn’t a collection. It’s the sign you need to seek professional help.

When I was a kid, collecting kept me busy – stamps, coins, comic books, match programmes, cinema tickets, badges, NASA mission patches… It wasn’t just a sad anorak boy thing, show me the woman over the age of 30 who didn’t have even a brief-lived flirtation with the world of “fancy paper” and I’ll show you ten who did. When I got my own place and moved out, the collecting faded, but the base need to surround myself with stuff that I liked continued and that mostly manifested itself in music, movies and books.

OK, that’s a lie. I still get whims from time to time. Like my 5 year dalliance with editions of Harry Potter in foreign languages I couldn’t necessarily read or relentlessly scouring every handful of change for Euro coins from different countries when the new currency came in. I found a Maltese one in a petrol station yesterday. I’m ashamed to say I tried forcing that leftfield “hobby” on my kids. That sort of thing is considered a crime in some forward thinking countries.

Once, you could tell a huge amount about someone if you went into their house and had a bit of a nose through their shelves of CDs, DVDs and books. Try that now and quite frequently it involves you having to touch their phone, laptop or kindle which just makes you look a bit… weird. That or rummage round in their Netflix or Spotify (weirder) or, as in the case of my eldest son, check internet history to see what songs he’s been listening to on Youtube (weirdest!)

Not for me, but it’s more than likely that we’ll reach a point relatively soon along the digital highway where physical media will seem as old-fashioned as galloping consumption or devout Catholicism. CDs and DVDs the landfilled cousins of already heaped up vinyl, cassettes, minidiscs, VHS, 8 tracks and laserdiscs. Well, maybe not laserdiscs. Laserdiscs are cool.

What will future twentysomethings collect anyway? Friends on Facebook? Selfies? Streaming service playlists? Repetitive strain injuries? If things continue as they are we won’t actually own any of our movies or music collections anymore, we’ll just pay every month to have visitation rights. Albums on your shelf never asked to see the colour of your money before they let you play side one.

As for the box under the cupboard, if I tell you the story behind it we’re going to have to come to some understanding about keeping this between ourselves because some of it’s not strictly what the authorities would call “legal”, yeah? Cool.

I was standing in the remote Neolithic temple of Hagar Qim on Malta in 2010. It’s a UNESCO World Heritage Site and one of the most deserted, peaceful places I’ve been in the Mediterranean. The whole thing is made of the most beautiful limestone and as I was wandering and realised a small piece had come loose from overhead and fallen on the floor. “Who’ll miss it?” I thought. I pocketed it, thinking it would just be a lovely reminder of what was, at the time, my first trip away with my wife.

But, see, I’m a collector. So these days there’s the aforementioned box with bits of the Roman Forum, Giant’s Causeway, Duomo in Florence, the bed of the Thames, a piece of Parc Guell. Nothing history won’t miss.

There’s even a tiny, ceramic sunflower seed I “borrowed” from an Ai Wei Wei installation at the Tate Modern. There were millions of them. He can have it back if he ever asks. Everyone was doing it at the time.

I suppose that’s what all the things I collect about these days have in common – memory. I get a mug from each city I visit, keep tickets from gigs and programmes and playbills from the theatre. Even now almost all of my books have bookmarks made up of something from my life at the time – a flyer, a ticket, a boarding pass. They’re my very own memory palace. Except in actual boxes. And with less cannibalism.

But, won’t somebody think of the children??? What will they collect? My eldest has a few metal badges from football matches I’ve brought him to in Liverpool and my daughter, while being the most voracious reader I’ve ever met, gets most of her books from the library (I’d be bankrupt if that wasn’t the case!)

It does seem, however, that my youngest son has started collecting seashells.