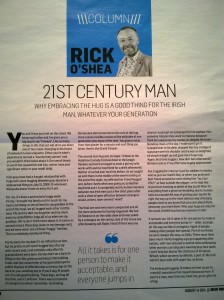 You and I have just met on the street. We know each other and I’ve given you a big hug to say howya.

Like so many things in life, that act will drive you down one of two roads diverging in the forest of awkward human etiquette. Either you’re what’s pejoratively termed a “touchy feely person” and you wouldn’t think twice about it (I’m one of those) or you’d feel squeamish and icky unless I was your significant other or your small child.

Irish guys have had a fraught relationship with hugs ever since hugging between guys became a widespread thing on July 15th 2006. Or whenever it became a thing. Wikipedia doesn’t have an entry for it yet.

Firstly I brought my family out for lunch for my mum’s birthday; my kids, my wife, Mum and Dad and my grandfather. As we all went to say goodbye at the end of the meal we all hugged each other in little twos. Me and my dad, my daughter and my mum, even my grandfather hugs all of us when we say goodbye. We’re don’t think twice about it, it comes as second nature these days (even to my teenage son!), but we were never one of those “huggy” families. This is a relatively newfound thing.

Particularly for my dad. It’s no reflection on him, but he pretty much never hugged any of us up until recent years and certainly only after his grandchildren were born. Let me say that again – it’s no reflection on him; he was born on a farm in Offaly in the 40s, grew up working in the building trade and the closest men of his generation got to public displays of affection was a strong clap on the back on your wedding day or if you’d dug 18 people out of a collapsed building.

These days we hug all the time, and it’s brilliant.

There was no moment of change from what I remember, no blinding Damascene Dad conversion to the cult of the hug, more a slow invisible erosion of the attitudes of one generation into those of the next. You glance away from that glacier for a minute and next thing you know there’s the Grand Canyon.

The second hug was stranger. I’d been at the Vodafone Comedy Festival down in the Iveagh Gardens and we’d arranged to meet a girl my wife works with and her boyfriend for a drink afterwards. Neither of us had ever met him before. As we caught up with them in the middle of the swarm exiting at the end of the night my wife and her friend hugged and, before I knew what was going on, so had her boyfriend and I. A completely warm, human moment between two Irish men just a few short years after such a show of open affection between strangers would, at best, have seemed “weird”.

The final one was even more unexpected and all the more welcome for having happened. We had Ed Sheeran in on the radio show and I was asked by a colleague on the serious side of the house (we affectionately call Radio 1 that) if there was any chance I could get an autograph for his nephew. He’s someone I desperately want to impress because I think he’s awesome (my words), so, despite the brain-blending chaos of the day, I made sure I got it.

I popped over to his desk, dropped the tiny smidge of signature over his shoulder and he was so delighted he stood straight up and gave me a huge hug. Again, first time huggers. How did I feel afterwards? Brilliant and as if my effort was hugely appreciated.

See, hugging for men isn’t just for soldiers in movies who’ve just survived D-Day or when you grab your best friend around the neck telling him “no, I luv YOU!!” at 3am outside the chipper or to stop two of you from freezing to death at the South Pole. It’s everything from a great ice-breaking, warm, human hello to a wonderful way of getting your tactile fix in the day, right the way up to the most obvious way of letting people close to you know that you care about them whenever you meet them. Who says hugs are only for the usual clichéd touchstone moments in life.

It spreads too. All it takes is for one person to make it acceptable and everyone jumps in, older, younger, all the way out like a contagious ripple of people making other people feel special. Jesus, that was a bit hippy dippy. It must be all the hugging…

Part of me thinks we were always this way, us Celts. There must have been much manly hugging a go go happening after battles with men dressed in animal skins embracing other warriors carrying axes wearing blue facepaint. I can’t help but blame the strictures of Victorian Britain, which we were, by default, a part of. We Irish weren’t born with stiff upper lips ya know.

I’ve embraced hugging (pun intended), it makes me feel closer to a world I sometimes find myself distanced from. If you’re a man, next time you meet me, go on, give me a hug.

From what I can see, hugging is everywhere. And about bloody time too.

This column originally appeared in the Irish Independent Insider Magazine.