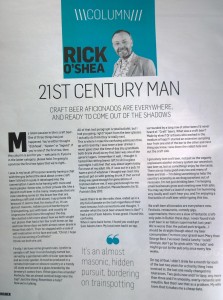 My latest passion in life is craft beer.

One of three things has just happened. You’ve either thought “dickhead”, “hipster” or “legend”. If you’re one of the first two then this column is just for you, welcome in. If you’re in the latter category, please hold, I’m going to convince the first two types that we’re right…

I was in my local off-licence recently having a chat with the guy behind the desk about a new craft beer I’d tried in a pub. It developed into the conversation I seem to be having with more and more people I know who, in their private life, like a decent craft beer in the many, many pubs that are now stocking some or the brave few that are stocking craft and craft alone. I say private life because it seems that for many of us it’s an almost masonic hidden pursuit bordering on trainspotting, just with beer, and usually an impressive food menu throughout the day.

We chatted a bit more about how we both sought out places that had a fair few craft brews on tap and how these days we both almost never drank in those that didn’t. Then he stopped with a look of self-realisation on his face and said, “Christ, I hope I’m not becoming a Crafthole!”

I think we both are, pal.

Firstly, I do have some ground rules. I prefer to sample craft beer in a confusingly named bar served by a gentlemen with circular spectacles and an ironic goatee. It must be produced in a remote Irish town or obscure country or a trendy US state and served in a glass branded by the brewery it comes from, preferably with a little-known font or a dirty title. If that glass has a handle? Perfecto. Has an almost comical bulge near the top? Just the thing. Resembles a tulip? Now we’re talking.

All of that last paragraph is total bullshit, but I had you going, right? Apart from the beer glasses. I actually do think they’re really cool.

This is where I make the confusing admission that, up until recently, I was never a beer drinker. I never gave stout the time of day (my granddads both drank stout) so my first beer was one of the generic lagers. I remember it well. I thought it tasted like rotting leaves left to sit in a glass overnight. I still feel that way about lagers today.

Then I made it to Boston, Massachusetts for St. Patrick’s Day 2012.

I went there to do the radio show, ended up in a city full of people on the lash regardless of their most tenuous Irish connections and thought “I wonder what the local beer around here is like?” I had a pint of Sam Adams. It was great. I found this confusing.

When I came back home I found you could get Sam Adams here. My local even had it on tap, surrounded by a long row of other beers I’d never heard of. “Craft” beers. What was a craft beer? Made by elves? Or artisans who worked in the medium of hops? Jesus, they were REALLY good and most of them were, astonishingly, Irish. I started an extensive sampling tour from one end of the bar to the other and next thing you know I was down the rabbit hole and out the craft side.

I genuinely love craft beer, not just as the vaguely unpleasant alcohol-delivery system our ancestors saw beer as, but as something that I enjoy for the taste. There are so many good ones too and many, many of them are Irish – I’m doing something to help the country’s economy as we drag ourselves out of recession. I’m not just drinking beer, I’m helping small businesses grow and creating new Irish jobs. You may say that’s a load of crap but I’m humming very loudly and I can’t hear you, and I’m enjoying a fine bottle of craft beer while typing this too.

We craft beer whores are everywhere now you know. Festivals, restaurants, comedy gigs, supermarkets, there are a slew of fantastic craft-only pubs in Dublin these days and the UK chain Wetherspoons, who are more than a bit craft beer friendly, are opening their first pub in Ireland this week. I even found Irish craft beer in an Italian supermarket last year! We’re worse than the pulled pork brigade…

I should be straight though about my beer consumption; I’m more your grand-aunt Mary than George Best. I’ve never lived a launchy, lunchy “celeb” lifestyle, don’t go for pints with “the lads” and might go out to the pub only once every few weeks.

On top of that I didn’t drink for a month for each of the last 2 years for a charity thing I was involved in; the last one really changed my tolerances as far as I can tell.

2 pints now and I’m tipsy, any more than 3 and I’m smooshy, overly-romantic and maudlin. Not that I see that as a problem. My wife loves that it makes me a cheap date.