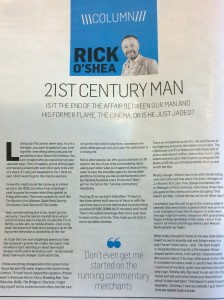 Losing your first love is never easy. You’re a teenager, you want to spend all your time together, everything seems new and the possibility of your future life limitless. You can’t imagine why you would ever go your separate ways. Then it happens, you’ve drifted apart and hanging around with each other gets to be a bit of a chore. It’s only just happened to me. I think it’s over. I don’t want to go to cinemas anymore.

I know this might sound like I grew up in a Hovis ad set in the 20s, but when I was a teenager I used to queue for movies when they opened on Friday afternoon. There were queues for stuff like Tim Burton’s first Batman, Dead Poets Society, Terminator 2 and Silence Of The Lambs.

Yeah we had nothing else to do, I grant you (no, seriously, I love the look on my kids faces when I tell them there was no internet, no satellite TV, no Netflix, no box sets, no mobile phones…) but in my head the amount of total dross being put up on the big screen these days is constantly on the rise.

I think everything changed when the screen in my house became the same shape as the screen in my cinema. TV itself hasn’t helped the equation. If there wasn’t American Horror Story, Breaking Bad, True Detective, Buffy, The Bridge or Sherlock I might drag myself out to a cinema more often, but the lure of a great story told in longform, sometimes over years, while you can curl up in your PJs with a beer is a strong one.

Hell is other people, too. Why go out and lash out 30 quid for the two of you to be surrounded by idiots asking each other what just happened because they seem to have the attention span of a distractible goldfish or blinding you like an old-fashioned usher by checking Facebook every ten minutes? Don’t get me started on the “running commentary” merchants.

Forcing me to watch things in 3D didn’t help either. Throw in a few times where stuff was out of focus or with the sound too low (or on one memorable occasion being screened UPSIDE DOWN for 15 minutes!) and I’m off. There’s the added advantage that I don’t even have to wear clothes at home. They make you do that in most reputable cinemas.

There are exceptions to all this, the last flames of my lingering desire for the hidden velvet dark. The Lighthouse and IFI in Dublin are still those sort of places with decent coffee, interesting movies and where everyone gets that if you’re lashing out the bones of 30 lids, you should probably shut up and watch the film.

Mostly though I think it has to do with movies being a bit shit in the last few years. For every Avengers or J.J. Abrams first Star Trek, Django Unchained, Her or Midnight in Paris honestly how many times have you gone to the cinema and come out going “yeah, that wasn’t terrible”. Is that the bar we’ve set these days?

I started to lose the will to go when it seemed that every time I scanned what was on in my local multiplex it was full of sequels to what were average original movies, romances with guaranteed happy endings (probably in the snow, rain or in an airport terminal) and things where Liam Neeson beats people up. Again.

What really brought it home to me was Interstellar. I went to see it recently and was blown away in a way I haven’t been since… well Dark Knight or Inception (there may be a pattern here). I had animated discussions about it for days afterwards in the office. It reminded me about what it used to feel like when I came out of my dark, quiet cave and into the light years ago feeling only the need to run out into the street and tell everyone I knew just how brilliant what I’d seen had been. That doesn’t really happen anymore.

Cinemas, I love you and all, just I think it’s time we maybe took a break.