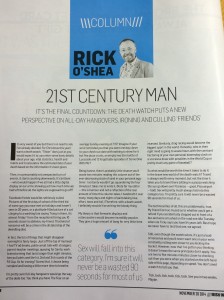 It’s very sweet of you but there’s no need to ask, I’ve already decided. For Christmas this year I want a death watch.

“Tikker” does just as you would expect it to: you enter some basic details about your age, vital statistics, health and habits and it calculates the estimated date of your death based on the information it’s been given. Then, in a presumably not unexpected turn of events, it starts counting downwards.

It’s brilliant – what would happen if we all had a little digital display on our arms showing just how much time we had left before all the lights are supposed to go off? Facebook friends would be ruthlessly culled overnight. Pictures of the first day of school of the third kid of some guy you once met on holidays and haven’t seen in twenty years or a platitude-filled picture of a cat clinging to a washing line saying “hang in there, it’s almost Friday” from the receptionist bring you ten seconds closer to oblivion, my friend. That kind of nonsense will be a crime in the dictatorship of the dwindling dial.

In fact the list of things that might disappear overnight is fairly large. Just off the top of my head I had TV ad breaks, polite small talk with strangers, parent-teacher meetings, queuing for Santa, work brainstorming that lasts longer than eight minutes, two-pull pints and the 1st, 2nd and 3rd rounds of the F.A. Cup. As for ironing? Screw that. I choose being rumpled and having a little more time to breathe.

I’m pretty sure full-day hangovers would go the way of the dodo. You think you have The Fear on an average Sunday evening at 7.15? Imagine if your wrist reminded you that you were one day closer to your check-out date with nothing to show for it but 5 toast crusts, an empty two litre of Lucozade and twelve forgettable episodes of Come Dine With me?

Being honest there’s probably little chance you’d waste two minutes reading this column out of the ever-decreasing stock of sand in your personal egg timer. I certainly wouldn’t waste the four minutes out it takes me to write it. (Note for my lovely editor – this is humour and not a reflection of the real amount of time this column takes. I handcraft it over many, many days and nights of painstaking love, effort, tears and toil.) Therefore with a death watch I definitely wouldn’t be writing the bloody thing.

My theory is that fireworks displays and rollercoasters would become incredibly popular. They give a huge amount of bang for very little time invested. Similarly, drag racing would become the biggest sport in the world. Who in their right mind is going to waste hours of mortality on a scoreless draw with penalties in the World Cup or pretty much any game of baseball?

So what would be worth the time it takes to do it in the brave new world of the death watch? Travel is always worth every moment, but not the time it takes you to travel there (sitting in a Piazza watching the sun go down over Florence good, Pisa airport bad.) Sex will pretty much always fall into this category too. I’m pretty sure it will never be a wasted 90 seconds for most of us.

The technicalities of all this are problematic, true. My friend Cormac mused as to whether you’d get a refund if you accidentally stepped out in front of a bus and were smushed on the road one idle Tuesday when ole Ticky says you have 54 years left. Best hope we never have to test that one, we agreed.

Still, even though the watch exists it’s just a load of nonsense and you’d never want one on your wrist constantly rolling ever closer to you kicking the bucket. However now that I’ve gotten you thinking it doesn’t mean the same principles don’t apply. You are three minutes closer to checking out than you were when you started on the left hand side of this page. You don’t need a watch to tell you that.