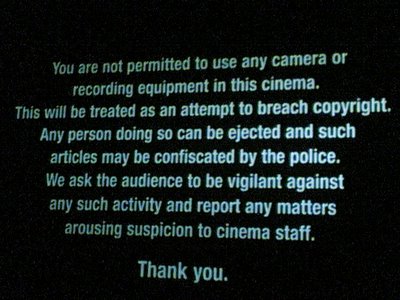 Always wanted to see what would happen if I took the picture above with my phone. Consequences in Dundrum on a Tuesday afternoon? Zero. Don’t know what society is coming to.

Went to see March Of The Penguins finally and depending on the sort of person you are it’s either an astonishing, heartwarming story of triumph (and yes they do actually use the word “love”) against the odds in one of the most inhospitable places on the planet by these really, really cute little furry things or a boring National Geographic cast-off that the religious right in the US has taken to their hearts because their grip on reality is so tenuous that they see penguin’s temporary breeding monogamy as a celebration of the traditional nuclear family unit in a godless world. 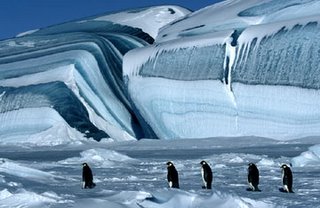 Actually it’s a bit of both – the lengths the emperor penguins go to when breeding in Antarctica is extraordinary and thrilling from a narrative standpoint and the religious right in the US are nuts. It’s all part of life’s rich tapestry.

Well worth your time though, beautifully shot in very extreme weather conditions and reaffirms my slim belief in our intelligence when something like this can become a box office success in the multiplexes. 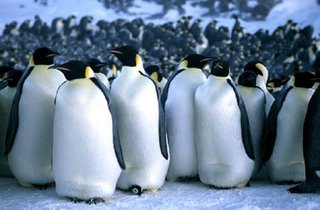 I showed my 7 year old The Italian Job (original as if you have to ask) and when it came to the ending with the bus teetering on the clifftop and the shot pulling away he was flabbergasted. After having seen a movie he really enjoyed he felt cheated by what many regard as one of the most memorable in modern cinema. Why? He’s 7.

Every film he sees resolves itself in a “good guys win, bad guys get their comeuppance, roll credits” kind of way and to see anything else is unfair to the point of being disturbing. It wouldn’t have been that important (I’m probably not telling you anything new you don’t know) if not for my friend Justin’s text after he saw the Spielberg War Of The Worlds when he was off sick the other day.

He enjoyed the movie but asked “what was that all about?” when he came to the ending where the alien invasion force is stopped in its tracks by common bacteria and not mankind. Have we gotten to the stage where any of our stories that don’t end in a formulaic way are so scary as to be dismissable?

I’m one of the ones that loves the ones we all remember, the ones that live with you… Ours would be a poorer movie landscape without Se7en, Planet Of The Apes, The Birds… Try to round that list out to an even 10. Any luck?

4 thoughts on “March Of The Penguins, Movie Endings…”