The long weekend looms so I’ll leave you probably til Monday with a few things that caught my eye over the last day or so… But first the promised pix from last night at the Trinity Philosophical Society music debate last night. The motion was that “Pop no longer rocks” and no, none of us knew either what that meant or which side of the argument we were on although Paul Brady, Jenny and myself did muse in the waiting area beforehand about how nice their floodlit tennis courts were and how many people must have vomited on the floorboards we were standing on over the centuries 🙂

It was extremely weird to be introduced to Paul (as I know quite flippantly call him) as he’d actually heard of me! Sweet… My witty retort to this was “you know the version of Nothing But The Same Old Story that’s on the Bringing It All Back Home album? That’s one of my favourite songs ever you know.” Sad, sad, sad.

Ashley from the Frank And Walters may be the single best public speaker I’ve ever heard. He spent at least ¾ of the time not speaking to the motion at all but instead talking about his 94 Corolla, what we used to use for contraceptives in the late 1980s and why the lad in the local 24 hour service station is always rude when he serves him Pringles. Brilliant! Wish I had the text of it for you.

There was also a girl present who was painted blue from head to toe. I now realise I didn’t get a picture of her for here. Arse. 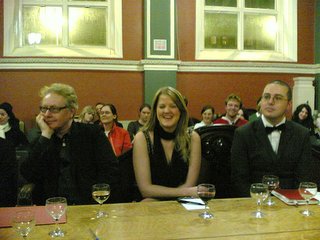 Paul Brady, Jenny Huston, Ashley Keating.. None of whom wanted to sit on the same side of the table as me… 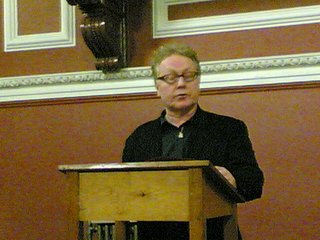 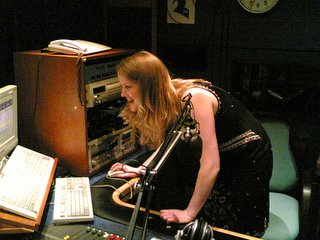 Jenny continues the “formal wear in studio” theme for the evening…

A few extra bonuses for the weekend that I realised were still on the phone:

The airlock in my local bank. Seriously. You have to press a button on one side, enter the airlock, let the door close and then press the button on the far side. It presumes that your armed robbers aren’t very tech-savvy or patient. 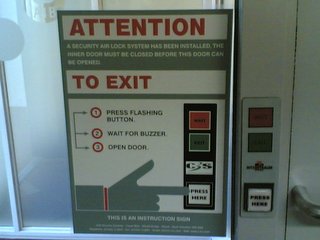 The new menu at Starbucks! Even they have gone the Christmas route already with eggnog and gingerbread lattes… Not sure whether they sound divine or vile. 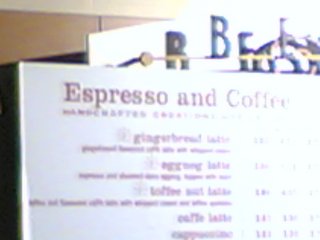 Following on from the pic that Alan took a while back of his van here’s the actual dispenser of Joe Soap Inc! 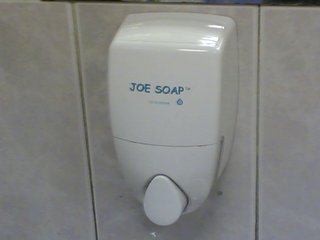 Realised looking back on last night’s playlist that almost half of what I played was Irish. Entirely unintentional but something I’ll gladly be proud of and take credit for 🙂