Today’s little odyssey is as follows… 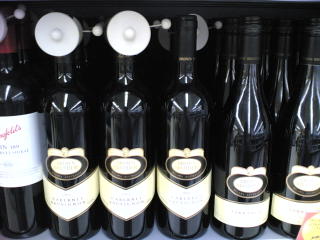 This may seem an unusual image from Tesco’s wine department but have a think about it. The wine on the left is a Brooks Brothers Cabernet Sauvignon, the ones on the right BB Tarrango (with a very tasty Penfold’s tucked over at the very left but let’s not get distracted…) 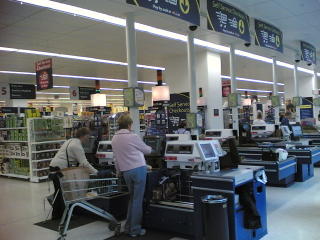 My Tesco also has these – self service checkouts. You scan, pay, bag and leave all without the assistance of a staff member. I refuse to use them in case it puts someone out of a job 🙂 That’s also the reason why I don’t have an ATM card and go to the counter in my local branch too :-)) 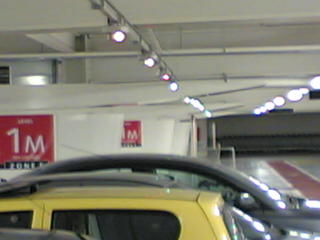 This may be the most pointless pic on this blog ever. If you look very closely you’ll see some of the lights above the parking spaces in the Dundrum SC are red, others are green making it mad easy to find spare spaces. An example of technology I like!

Probably quiet now til at least Saturday as I head off to Waterford tomorrow night – top spot! Show starts in about 15 mins (Franz Ferdinand interview and new tracks from Ryan Adams and the new Christy Moore album where he covers Morrissey!) and then back next Monday…

Loved the word I coined on the show last night – blogressive. It refers to my public hassling of my mate Liam to post more to his blog HERE. It worked!

PS Howya in many different languages to some of the locations the blog has been accessed from in the last day or so: 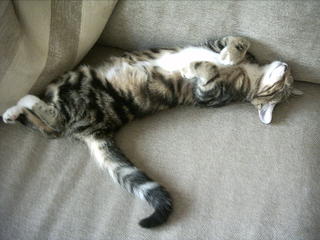