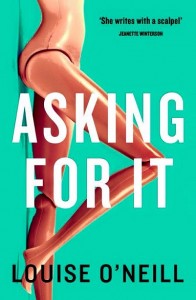 It had been out for a while, but I can’t believe it’s only 6 months since I got my arse in gear and reviewed Louise’s first, award-winning book Only Ever Yours.

Unlike her first gem, this is not set in the future; this is Ireland right now in which Emma, a teenage girl, is gang-raped while drunk at a party, remembers nothing of it and wakes up on the doorstep of her family house the next morning. She has pictures of what happened trawled across the internet and then has to deal with the unexpected fallout as the perpetrators are outed, social media weighs in and the law slowly grinds into gear.

First things first. This is not an easy book to read. It’s harrowing, brutal and nauseating in places because of the subject matter and the vivid reality that it’s all shown in. I realise that’s stating the bloody obvious. I only do so because I’d urge you to get beyond any initial squeamishness you might have – this book looks under the bonnet of society, sex, violence and all of its generally fucked-up hypocrisies.

What’s so perfect about how O’Neill tackles the story is Emma herself – she’s vain, self-centred, has no redeeming qualities whatsoever and thus makes the perfect fictional test case for the disturbing attitudes of seemingly civilised sections of society when it comes to how it deals with the “blurred lines” (of which, of course, are no such things) of rape.

It barrels full-tilt through victim blaming, rape culture, religion, scandal avoidance and the sickening insularity of small towns not just in Ireland but everywhere. It’s thrilling and sickening to see how she pulls absolutely no punches in her ending just as with her first novel (how you wish every author had the balls to do that!)

One other thought – I would never suggest that “YA” is a lessening term, but, just as with Only Ever Yours, this book could easily be released straight on the shelves of new mainstream fiction and no-one would be any the wiser.

You have to read it. I am pleased to add my voice to the chorus of reviews urging you to grab a copy. It’s impossible ever to describe something like Asking For It as “entertaining” or “a great read”. It’s just great.