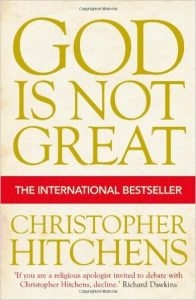 For me it argues many of the same points as Richard Dawkins The God Delusion in fairly much the same fashion wandering thorough the nature of the origin of religions,  why they exist, why people cling on to them and his thoughts about the damage they have done and continue to do.

I have “Arguably” (his enormous collection of collected pieces and essays) which covers a lot of the same ground as here so maybe that’s why some of what I was reading felt like a repetition of things of his I’d read before. I would point you towards “Mortality”, his short book written as he knew he was dying from cancer for some incredible meditations on the issues of death, dying and how you face it knowing that there’s nothing on the far side.

If you haven’t read him before though, and in particular his writings on organised religions, this is probably the place to start.

Just another potent reminder of what an incredible mind and voice he was and how his take on so many things was cut off cruelly and too early.