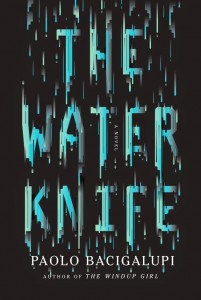 I know this review is a little early (it’s not out until May 26th) but this is one you should be looking forward to.

It’s set in a dystopian future (and yes, I’m aware of how many of those I’ve been in recently but there are so many deliciously depressing options on offer!) in the Southwestern United States where water is the only thing that matters.

Angel is a hard-man sent to Phoenix by the shady boss of water in Las Vegas to investigate a problem, Lucy is a journalist there living embedded in the vast majority of the city that is, in essence, a conflict zone since most of the city’s water disappeared, and Maria is a refugee from the most despised state in the union – Texas.

Ultimately it’s a fictional (for now) story set in an America not too far from many of the real-life climate disaster scenarios presented recently by Naomi Klein in This Changes Everything. A vast gap between rich and poor (the former living in sealed off developments in the sky, the latter peeing in bags designed to recycle the water for drinking reuse) set on sand and dust filled streets not unlike sub-Saharan Africa.

Water is the most precious thing, state borders are closed, refugees are everywhere, exploitation is rife, covert wars are being fought. If things don’t change rapidly, the world of The Water Knife will be a reality for people in huge tracts of the world.

But is it any good as a thriller?

Bloody right it is. I can see why people have spoken of him in the same breath as William Gibson. He tells a swift, brutal, real story in a wonderfully plausible universe that will leave you scared for your own future and left me with actual shivers down my spine at times. There are more than a few very clever mirrors and nods of the hat to Chinatown too.