The Drowned World by J.G. Ballard 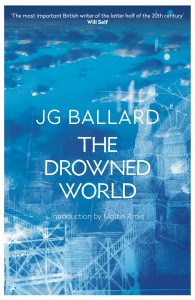 Now we’re talking. I stumbled across Kingdom Come a few years back and quite liked it but people speak in reverential tones about his earlier stuff, and rightly so.

The Drowned World deals with a future a few decades after solar flares have destroyed the Earth’s climate and most of the planet is flooded. A few million humans are left living at the poles and almost everything is underwater. Some scientists are rifling through the upper levels of the lagooned cities and human being have changed, forever.

It’s not what you think, it doesn’t play out the way it would if it were written today. Rather than deal with piddling things like practicalities (as most end of the world stories do) it deals with what happens to the human mind, the inner world and it’s unlike anything I have ever read in the genre.

And that’s a lot.

It absolutely belongs in the very top drawer of SF. Adored it.