Right, loads to talk about and very little time to do it in as we have an early start and a longer show than usual tonight…

If you’re one of Nikki’s usual listeners there may be some culture shock. Sorry. Just put your head between your knees, breathe into a paper bag and kiss your preconceptions goodbye.

Only one photo from the weekend as my lovely little daughter was a bit poorly so we were mostly confined to barracks and it’s this one: 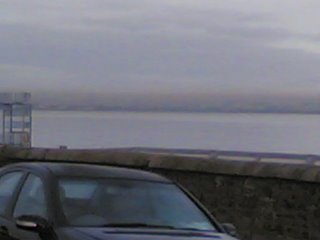 In the middle, running perpendicular with with the top of the tower to the left, is the haze of scum that was over the city last Friday morning. Creepy…

Anyhew… Despite having quite strong political opinions and many, many(!) thoughts about the day’s news and what’s going on in the greater world today it’s usually the sort of thing I keep away from here. There are hundreds of far better equipped commentators online for that kind of thing and anyway, I’d rather be creating something new rather than commenting on something already existing online (although, to be fair, the value of Messages My Coffee Is Sending Me or Park Jobs Of The Rich & Famous in the greater blogosphere is queestionable at best…)

Saturday was a day I was glad to be Irish. Among the trillions of pages online now devoted to the Mohammed/cartoon controversy let me add this. When the Irish muslim community chose to protest last Friday their placards were of a slightly different shade than those across most of the rest of the world.

“Caricatures are violations of human rights”

and my personal favourite:

It made me proud to live here that our muslim brothers took such a rational and principled stance… Not for us the burning of flags or embassies, instead the holding aloft of banners reading “freedom of speech should be responsible”… Fair play to them.

That it also echoed the Father Ted episode where they protest outside the cinema with the placards saying “Down with this sort of thing” and “Careful now” was delicious too… Maybe Father Ted is big in the Irish muslim community…?