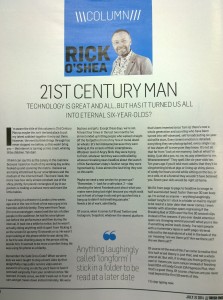 I’m aware the title of this column is 21st Century Man so maybe this isn’t the best place to put my latest cobbled-together theory out there. However, the need to think things through has never stopped me before, so this week I bring you – the internet is turning us into small, whining little children. Tah dah!

I think I can say this as the canary in the coalmine because I spend so much of my working day online, hooked up and scanning The Matrix – we are being infantilised by our smartphones and the medium of the internet itself. The more I look, the more I see how daily almost constant use of the shiny, pretty, fun plastic rectangles of joy in our pockets is making us behave more and more like little babies.

I was sitting in a theatre in London a few weeks ago and in the row in front of me was a guy in his 20s with his family. They were from Texas (I’m not an earwigger, swear) and like lots of other people in the audience he had his smartphone out before the performance and then during the interval as well. It took me a while to notice, but he wasn’t actually doing anything with it apart from flicking it so the screen lit up every 15 seconds or so. He wasn’t actually looking at the phone while he was doing this, in fact he was chatting away to the person sitting beside him. It seemed to be more a comfort thing.

He was using his phone as a blanky.

Remember the Safe Cross Code? When we were kids we were taught to stop at kerbsides by that delightfully poorly made public service video and an earwom of a song so catchy you’d have to have it removed surgically from your cerebral cortex. We learned, it made sense, we didn’t walk out in front of cars and get mown down indiscriminately. We were big boys and girls. Except these days, we’re not.

At least 4 times in the last two months I’ve almost ended up hitting people who walked straight off the footpath in front of my “box of metal death on wheels” (it’s her nickname) because they were looking at the screens of their smartphones. Whatever level of Angry Birds they were trying to finish, whatever text they were enthralled with, whatever breaking news headline about the launch of Kim Kardashian’s baby’s fashion range they were hypnotised by, it was almost the last thing they saw on this earth.

Maybe we need a new version for grown-us?

“Remember, 1 – look for a safe place, 2 – stop checking the latest Face…. book post about what your mates were doing last night because you might walk out in front of a huge truck and get squished into a bang up to date if not breathing pancake.”

Needs a bit of work, admittedly.

Of course, when it comes to FB and Twitter (and Instagram, Snapchat, whatever the newest platform that’s been invented since 7am is) there’s now a whole generation and counting who have been turned into self-obsessed, self-broadcasting 6-year-old selfie stars. Every tiniest emotion is detailed, everything they see photographed, every single cup of tea shown off to everyone they know. It’s not all that far from “look at me mammy, look at what I’m doing, I just did a poo, no, no, no, pay attention to me. Wheeeeeeeeeee!”

10 years ago if you’d told most adults that slingshotting birds at pigs or lining up shiny pieces of candy for hours on end while sitting on the bus or on your sofa or at a funeral was what they’d do on a regular basis they wouldn’t have believed you. 7 year olds would be (and are) right at home.

I read a brilliant book recently that should be handed out with every handset. Nicholas Carr’s The Shallows deals with the way that using a medium like the web can, over relatively short periods of time, rewire the way the human brain works and alter what it finds interesting, useful and worth pursuing as well as radically change attention spans.

As far back as 2008 the average time spent browsing a single webpage before you moved on was around 21 seconds. Surely that’s shorter now? We flit from page to page to headline to image to half-assimilated tweet faster than our crap 3G can keep up. I’m as bad as anyone – anything laughingly called “longform” I stick in a folder or mail to myself to be read at a later date that never comes. I even wonder with attention spans regressing if the Breaking Bad of 2034 won’t be five 30 second clips instead of five seasons.

Of course at the end of this I’ve come to realise that this half-arsed theory is just that and not a whole arse at all, but still, if it stops you from getting run over or means you cure cancer instead of finishing level 1054 of Candy Crush CIA Hypnosis Plot then that’s a good thing. Of course chances are you never read beyond the first 50 words of this.

Originally published in the Insider Magazine in the Irish Independent.

Miss the earlier columns about craft beer, being an ambivert and books? Have a look here.

After I posted this I was mailed by Andrew Arseblog. Fascinating stuff…

We’re just back from New York (sold out book tour for Arseblog, woo hoo!), but the hotel we were staying at had, for two days, gaggles of teen girls outside. We assumed some kind of celebrity, a Bieber or something like that. The hotel were completely discreet when we asked out of curiosity, but one of the parents of one of the girls told us they were all waiting for some 16 year old lad who makes Vines.The security guard told A that when he emerged, they chased the town car down the road, one of the girls lost a shoe, another fell over and hit her head. It was pandemonium.So your Breaking Bad of 2034 is actually already happening. This fella is a celebrity that gets a Beatle-esque following (albeit much smaller) through social media itself, 6 second clips = fame. I still have no idea who the ‘Viner’ is but there you go.