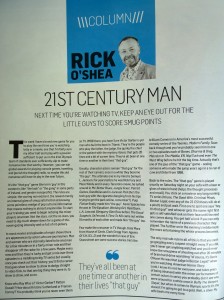 Now that I say that, you can win global awards for playing console games, tweeting, and (perish the thought) radio so maybe this old nonsense will have its day sometime in the near future.

It’s the “that guy” game (the term ‘guy’ in this context is like “the lads” or “the gang” in some parts of Ireland and gender nonspecific).

The rules are simple, the scoring non-existent, the rewards merely the internal glow of smug satisfaction at knowing some pointless smidge of pop cultural information that means nothing to almost anyone else (apart from that actor’s family and friends, obviously). This means the game is perfect for me.

To start your training you need to begin noticing the minor players onscreen. Not the stars, not the co-stars, you need to dig much deeper down for a game of this navel-gazing intensity and so full of nit-pickery.

In most movies and episodes of major shows there are appearances by actors who are journeymen. Men and women who are eternally fated to be onscreen for a few minutes or in a fairly minor role and then who disappear off your radar for a few years. Maybe every now and then they’re lucky and get a role over 8 episodes in a middling to big TV series but usually, once you do cave and check out their history, you’ll find a journeyman career of show to show to show to dodgy straight to video flick to the one big thing they were in, to show to show.

Know who Ray Wise is? Victor Garber? Patton Oswalt? How about Kristine Sutherland or Frances Conroy? You probably think you’ve never seen them on TV. IMDB them, you have. They’re the people who play the father, the judge, the quirky fire chief or the patient with the mystery illness that gets 20 lines and a bit of screen time. They’ve all been at one time or another in their lives “that guy”.

Usually, they remain “that guy” for the rest of their careers; once in a while they become “the guy”. The ultimate one in my mind is Samuel L. Jackson. For years before he was Nick Fury, Mace Windu and in every Tarantino movie he lurked around in Mo’ Better Blues, Jungle Fever, Patriot Games, Goodfellas and finally in Jurassic Park (he’s the tech guy with the cigarette dangling from his lips trying to get the park online again, remember?) Pulp Fiction finally made him “the guy”. Kevin Spacey too. He was in The Equalizer, Working Girl, Heartburn, L.A. Law and in the most minor of roles (he’s the office manager) in Glengarry Glen Ross before The Usual Suspects, Se7en and A Time To Kill came out within 18 months of each other and made him “the guy” too.

Few make the crossover in TV though. In recent years there’s been Kate Mara from House of Cards, Clark Gregg from Agents Of S.H.I.E.L.D. and the wonderful case of Eric Stonestreet. He’s the brilliant Cameron in America’s most successful comedy series of the 2010s – Modern Family. Scan back though and you’ve probably seen him in one or two episodes each of Bones, Dharma & Greg, Malcolm In The Middle, ER, Nip/Tuck and even The West Wing before he hit the big time.

Back to the rules. The “that guy” game is played usually on Saturday night on your sofa with a beer or glass of wine in hand (helps the thought processes and recall). You stick on a movie or any long running TV series (House, The Good Wife, Criminal Minds, Boston Legal, even any of the 23 CSI shows will do at a pinch) and just wait. First one to spot one says “hey, it’s that guy!” and whoever gets the name right first gets a self-satisfied look on their face and, frankly, little else. You get half a look if you can only remember the name of a previous character they played. The further on in the evening’s imbibement the more entertaining the whole process becomes.

The only real sub-rule in all of this is that you can’t go IMDBing every suspect straight away. If you did you’d never get anything watched in that case and you’d never know the ‘World Cup Final goal scoringness’ of shouting out after 20 minutes of brain hard-drive searching “of course, it’s Denis O’Hare! He was that judge in Boston Legal!” when you’re watching American Horror Story.

Look, I know it’s not for everyone and takes years of being obsessed with the minor performances of certain actors in series you probably didn’t see who were around for a while once in Buffy but when it comes to Olympic sports it’s the closest I’m going to get to a gold. Well, a silver. My wife beats me every time.