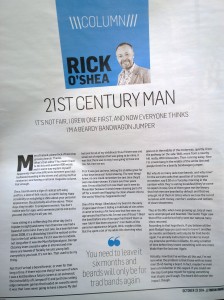 Men of Dublin, please feck off and stop growing beards. Thanks.

You mean I have to fill this with another 800 words and in some way explain myself? Apparently that’s the difference between good old-fashioned standing in the street and yelling stuff at randomers and having a national newspaper column. Fair enough.

Once, beards were a sign of radical left-wing politics, a love of folk music, an earth loving hippy sensibility or not giving a shite about your personal appearance. Occasionally all of the above. These days it’s like pregnant women. You don’t notice one for ages until someone points one out to you and then they’re all you see.

I was sitting in a coffee shop the other day (not a hipster in sight) and every man there bar one had a beard of some kind. Every last one. As a bearded man for the last 5 years it’s a disturbing trend I’ve noticed on the rise in for the last while now. First it was the trendoids, not long after it was the Mumfordpocalypse, George Clooney even caused a spike in interest and now, post-Hozier, there are hoards of facially hirsute young lads everywhere you look. It’s not fair. That used to be my thing.

Not that I’ve had a beard forever, or even for that long a time. If there was one thing I was sure of when I was a kid (besides a future career as an astronaut, the invincibility of Liverpool FC and just how cutting edge computer games that loaded on cassette were) it was that I was never going to have a beard. My dad had one for all of my childhood, thus if there was one small act of rebellion that was going to be mine, it was that there was no way I was going to have one too. Yet, here we are.

First it was just laziness, letting the stubble grow for a few days because I hated shaving, next thing I knew no-one could remember the last time they’d seen me clean shaven. It’s been over four years now. I’m so attached to it now that I won’t even do Movember because it would mean shaving part of it off for a month and flapping my clean-shaven chin to the world. What happened to me?

One of the things I liked about it in the early stages (apart from it hiding a multitude of sins when it came to having a fat face) was that few men my age around had them. No, I’m not one of those “I liked the band before any of you guys had heard them so now I don’t like them anymore” merchants of the personal appearance brigade. Well, maybe a little. I’ve spent a lot of my adult life observing what goes on in the middle of the motorway, quietly, from the pathway on the side. Well, more from a nearby hill really. With binoculars. Then running away. Now I’m smack bang in the middle of the white line and people think I’m a beardy bandwagon jumper.

But why do so many lads have beards and why now? I’m the sort who asks that question of colleagues at random, say 9.30 on a  Tuesday morning in the canteen whil they’re eating breakfast (they’ve come to expect it now). One of them gave me the theory that Irish men are bearded by default and that we only get rid of them in times where we lose the run of ourselves with money, comfort, vanities and notions of clean-shavenness. It would explain Peig Sayers. Thus in the 80s, when I was growing up, lots of men were unemployed and bearded. The Celtic Tiger saw that off for a while but fairly soon our natural hairy chins returned.

According to that hypothesis, if you believe all the post-Budget hype you just need to leave it another 6 months and beards will be only for trad bands again. I’ve already instructed my broker to invest my extensive portfolio in Gillette. It’s only a matter of time before they invent something with one more blade than the last one. Again.

Actually, now that I’ve written all this out, I’m not sure what the problem is that I have with so many men 25-45 having a beard. In fact, maybe I’ve even been a trendsetter in this regard. If you could see the slap I just gave myself for typing something that stupid, you’d laugh. The beard did cushion the impact, though.