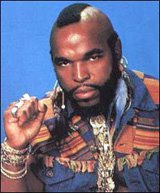 Mr. T speaks only when necessary. His main form of communication is folding his arms and slowly shaking his head. And regardless of the situation, he is always understood.

Mr. T invented fools. Realizing the magnitude of his folly, he then created Pity.

There are only four horsemen of the apocalypse, because Mr. T is going to walk.

23. That’s the number of people Mr. T has pitied in the time it has taken you to read this sentence.

You have only seen Mr. T in human form. In Narnia, he is a T. Rex with a lion’s tail hanging out of his mouth.

In 1995, Mr. T was diagnosed with B-cell lymphoma but he pitied his own fool cells until the disease turned into T-cell lymphoma. Upon closer inspection by doctors, the cancerous T-cells now had mohawks, gold chains around their nucleus and were tired of the other cell’s jibba-jabba.

Mr. T was fired from the Psychic Friends Network for always predicting pain.

Remember when Mr. T wasn’t so popular and awesome? Me neither.

They say when a bear is chasing a group of people, you don’t have to outrun the bear, but only have to be faster than the slowest person. If Mr. T is chasing you, you’re dead no matter what.

Mr. T made his van go twice the speed of light because he wanted to prove that quantum physics was a bunch of jibba jabba.

Mr. T doesn’t have internal organs. He had them removed to make more room for muscle.

The United States Federal Reserve Bank decided that Mr. T’s neck was a much safer place for their gold than Fort Knox.