Not a clue what’s happening today but tomorrow night we’re live at Movies@Dundrum in Dublin from 6 to 9 for our screening of Christopher Nolan’s new film The Prestige (and yes, we will have a few spare tx left over that we’ll be giving away on the night if you come down).

Sure come down anyway even if it’s just to say hello 🙂 Don’t think we’re in the cold, remote Roadcaster, think we might be in the cinema foyer itself and yes, that is going to be interesting…
Amanda’s in London today interviewing the stars and director.

I’m apparently doing Music Ireland too in a couple of weeks in the RDS. I say apparently because I was talking to Richie McDonagh (manager of Director & The Marshals) the other night when he said “Oh, I’m sitting on a panel with you at this thing I think…..” At that stage I did remember being asked a while back and my name is on the website so it must be true 🙂

On an entirely different note: 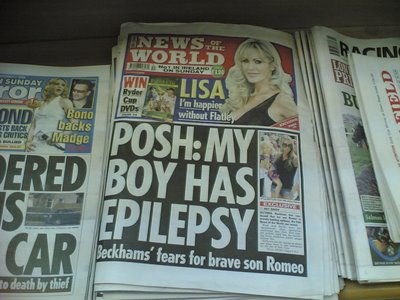 I had a few differing emotions when I read that headline yesterday (I didn’t actually buy the News Of The World, don’t be silly…) My first, I suppose, was “poor kid”. It’s harsh enough to get epilepsy when you’re 16 let alone when you’re 4. I hope it’s not true and that it’s all being blown out of proportion but I fear not…

After that it was the slightly cynical “well, at least this will help raise awareness a bit more”. The whole reason I became Brainwave’s patron this year was to help in exactly that respect. If this means that it becomes easier for people to talk about it then it is a small silver lining for others who have the condition in the Beckham’s cloud…

My third reaction was, as it always is, “tabloid jackals!”

PS Love Bebo. Really do. Only today I got a message from a 13 year old American kid asking me why someone as old as me was on Bebo and apologising “if I was retarded or something”.