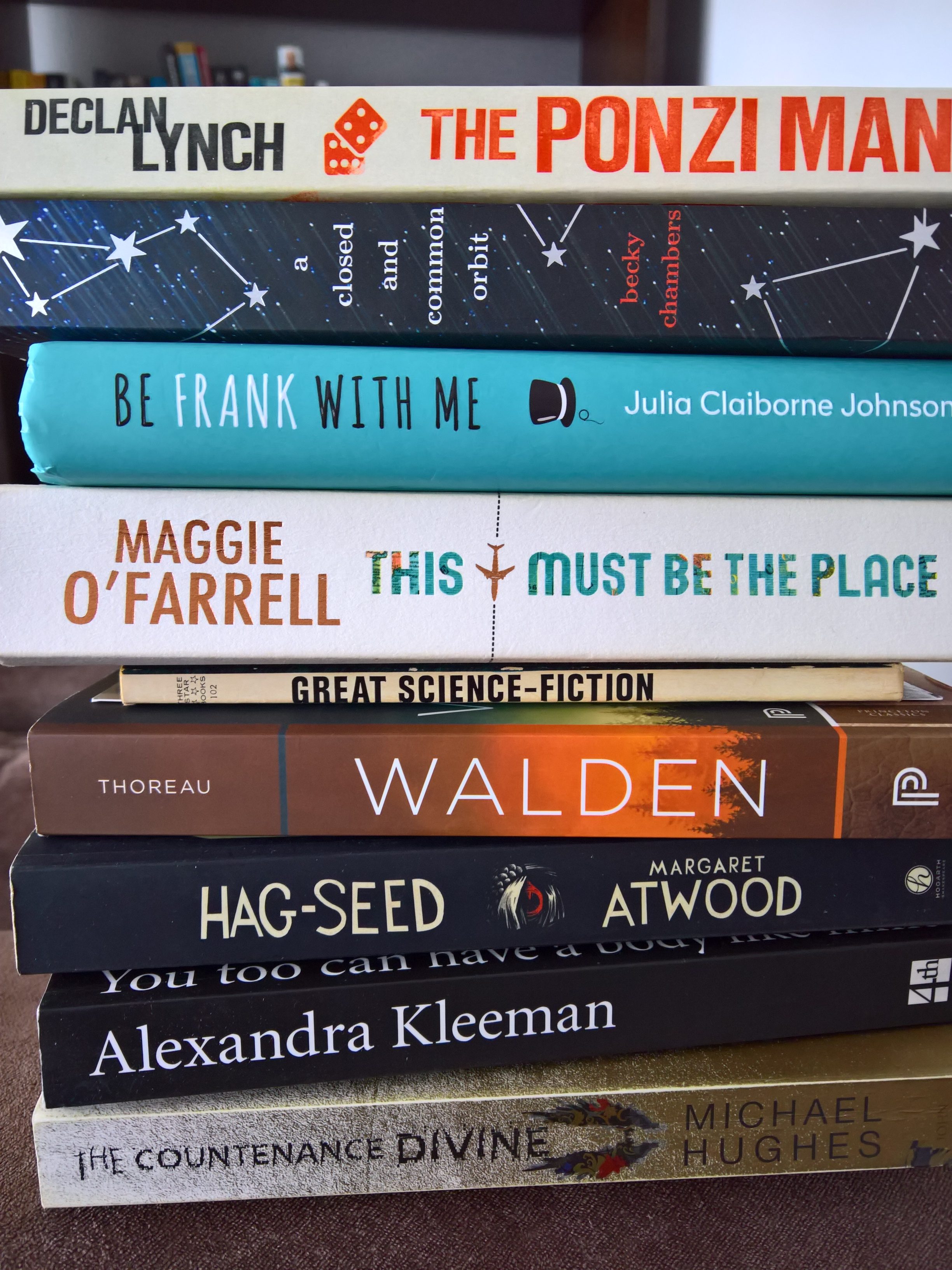 It genuinely says something about me that I think it’s a poor show I only finished 9 books when I was away for 2 weeks recently. Still…

As has proven popular before I’m going to lump them all together in one post here with short(-ish) reviews as, if not, I’ll never get to them all with the work bearing down on me over the next while!

Alexandra Kleeman – You Too Can Have A Body Like Mine

I wasn’t sure what to expect from this and, even now, I’m not really sure what happened. Just that I liked it very, very much.

A lives with her housemate B. B is starting to look a bit more like A. A’s boyfriend C thinks so too. That and the disappearing family from across the street with sheets on their heads, the bizarre obsession A holds with one kind of artificial store cake and the cat they advertise with and a whole other rabbit hole of surreal, bonkers, borderline trippy days that are underlied by a whole structure behind about body-image, self-esteem, consumer society, cult-like behaviour and mental health.

I was fairly sure the story was going one way and that I had a handle on it until it wriggled out of my grasp near the end leaving me as unsure about what I had been witnessing as ever. If I could put it in a stylistic box (and I wouldn’t dare) it kind of reminds me of recent books I’ve read by the likes of Ben Lerner, Tom McCarthy and even Tao Lin’s Taipei. She has a new book of short stories due out in the U.S. soon. I’m looking forward to reading it.

Not out here in paperback until January 2017 but readily available from U.S. online retailers and on Kindle.

What a gorgeous, wonderful, whimsical, human book. One that I only really picked up on a recommendation from one of the reviewers in my book club. Frank is the 9-year-old son of a reclusive onetime million selling author who lives hidden away in an LA mansion. Alice works for her publisher and is sent to help her finish her long-awaited new novel. Thing is, Frank dresses like he’s Fred Astaire and it’s 1930.

One of those books I’ve been threatening to read for years and years and I’m at least partially glad I did. It’s the legendary story of Thoreau building his own cabin on the shores of Walden Pond in the 1850s and living pretty much alone and in a state of self-sufficiency for 2 years.

Half is a brilliant and still relevant analysis of how industrialisation and capitalism has made the human race live, half is a fairly dull set of descriptions of the local flora and fauna. Keep the first half, skim the latter.

My second read in the Hogarth Shakespeare project after Anne Tyler’s disappointing Vinegar Girl; this couldn’t be more different. Atwood’s take on The Tempest involves a legendary theatre director and festival artistic director being fired on the eve of his radical new version of The Tempest. He’s sent into a lonely exile with only (the spirit of) his (dead) daughter and smouldering thoughts of vengeance upon those who have stolen his seat and he’s going to use The Tempest itself as the vehicle of his revenge. See where we’re going with this?

It’s a Tempest within a Tempest set in a world of people who know the play and are staging it(!) but yet never acknowledge, really, what’s going on here. Even aside from that her story of a failed brilliant artist looking for redemption or revenge or whatever by running Shakespeare productions in a prison is funny, smart and compelling.

(Out on October 6th)

A little gem full of 50s nuggets picked up (for free!) thanks to the Dublin Worldcon 2019 bid stand at Comicon this year. Little chance you’ll find a copy yourself, sorry…

It’s a Cloud Atlas-structured story slipping back through 1999, 1888, 1777 and 1666 and encompassing Y2K, Milton, Blake, the “From Hell” letters (that may or may not have been written by Jack The Ripper), the great fire of London and back again to the turn of the millennium.

Dizzying, fascinating, dense, entangling, occasionally wandering and enjoyable, even if I felt the end was a little bit of a damp squib.

This was, for me anyway, the surprise pick of the bunch as I brought it along for some light reading in between the heavy stuff. I was wrong.

It’s the story of a fictional high-roller business-dealer type who collapsed along with the rest of a whole economy at the end of “The Thing” as they refer to the Celtic Tiger. Now he’s back living in a mouldy caravan in the seaside town he grew up in surrounded by shadows of his past and waiting for his court case to decide how long he’s going to spend in jail.

As someone who spent all of his childhood summers in a similar seaside town (just much further south and a decade later on) his detail is beautiful but it’s his examination of the nature of addiction and gambling in people who took other people’s money and ruined many of them during the crash that makes this stand out.

Well worth the read.

If, like me, you loved the Firefly-influenced first part of this story, A Long Way To A Small, Angry Planet, then I am absolutely delighted to tell you that this sequel, set with only a couple of the characters from the first book, is *much* better.

Look, I know that SF may not, in theory, be your thing, but she writes characters with such (and I am aware it’s not the correct term, as most of them aren’t human) humanity and is, in effect, creating stories of life, love, difference and potential that just so happen to happen far from Earth and a long time into the future. There are almost no “bad guys”, no vast battles, no evil empires and no space opera plots here, just interpersonal drama that could happen, well, anywhere.

I get the feeling Becky Chambers has a whole universe of characters she could write that skate around the boundaries of what she’s written so far. I sincerely hope she does.

I would like to say there was always one on the holiday that was going to make me cry at the end but I so rarely do that, heartless bastard that I am. This did.

A story of people, relationships, moments that change whole lives and the (mostly) normal story of a group of interconnected people and families set over decades. I don’t want to tell you any more, find out for yourself.

Skilfully observed, ringing with truth and full of fascinating characters. The sort of thing that a book you bring on holiday should be.