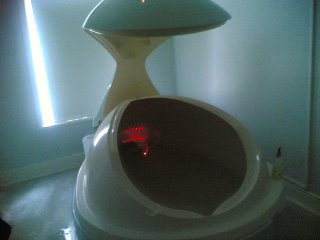 No, the above is not a vehicle of interstellar invasion, a movie prop or a photo of Michael Jackson’s bedroom. This morning I finally used my Christmas present from my wife and had my first ever session in a flotation tank.

I’ll be completely honest and say straight up that my image of what it was going to be like was that episode of The Simpsons where Homer and Lisa try them not the 21st century piece of kit I ended up in.

You lower yourself in after putting in earplugs (the eardrums can be a bit sensitive to all the salt in the water) and just gently float away in about 10 inches of highly salted water with nice plinky-plonky ambient music and low level red light for about an hour or so. It’s the closest I’ll ever get to weightlessness in orbit (a childhood dream…)

It’s weird but it takes at least a quarter of that time for your muscles to totally relax and realise they haven’t any work to do for once. You come out feeling like you can run a marathon 🙂 Had an Indian head massage after that which completely rocked… If only every day could be like that.

No hallucinations though… Shame about that.