Oh, alright then….. What happens on tour stays on tour….. Mostly 🙂

Friday, after finishing my shift at 12 it was Aircoach, airport and hook up with the group travelling. The lovely Darren and Laura from Warner Music along with Alan, one of theirs I hadn’t met before, Steve and Chris from Spin, Dave and Jenny from 104 and Ray F fromToday, all of whom I knew for donkeys. Liam T would be joining up with us in the UK.

I won’t tell you which one of us admitted to thinking that the model concorde outside Heathrow (about 1/5 actual size) was the real thing. See? I am keeping it on tour….. 🙂 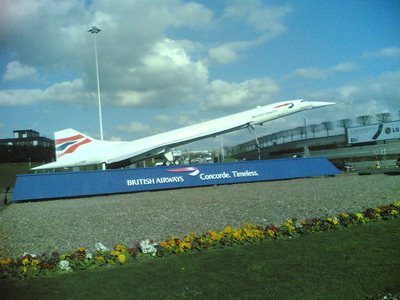 Very nice hotel, just a stagger away from the gig, met up in the bar with one of the guys wearing Rock Chick socks he’d borrowed from Jenny (see, see…… huh?! On tour!) 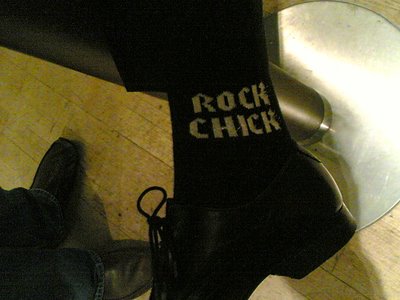 then off for dinner (Steve and I did note the absolute sacrelige of eating red meat and drinking red wine on Good Friday although I think we both salved our consciences by claiming it didn’t count when you were in a heathen country) and then to the gig. 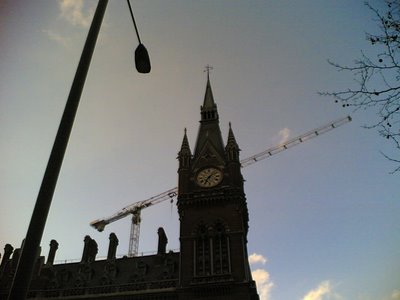 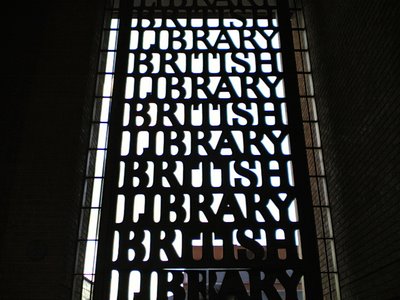 As we weaved our way down there was a fair bit of “yeah, I’m sure we’re almost there” until I pointed out to our group that it might be happening in that warehouse over yonder with the giant Chilis album logos being projected onto it, and thus it was so… 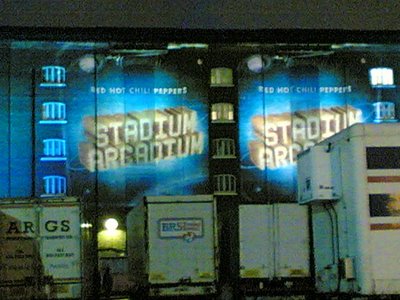 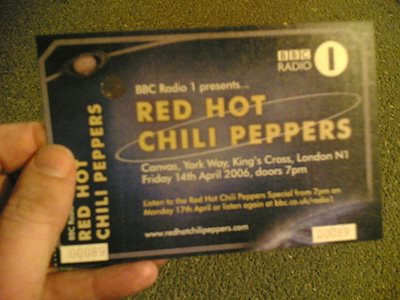 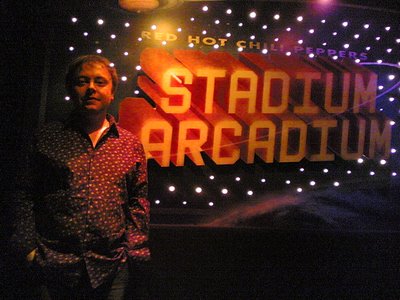 Apologies for the crap shots of the band, it was hard to get close to the stage and everytime I tried my ears started to bleed 🙂 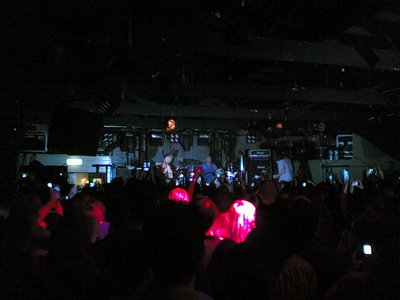 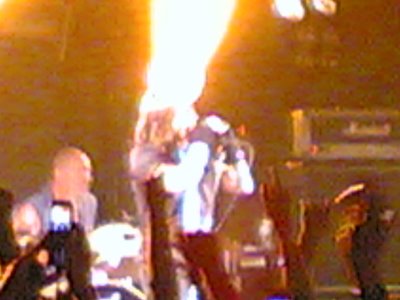 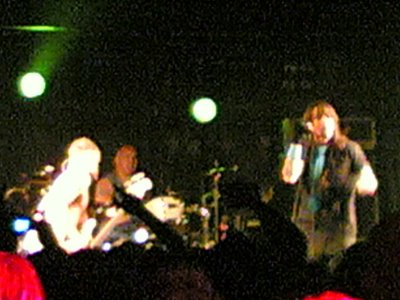 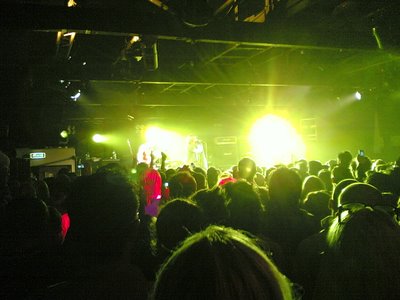 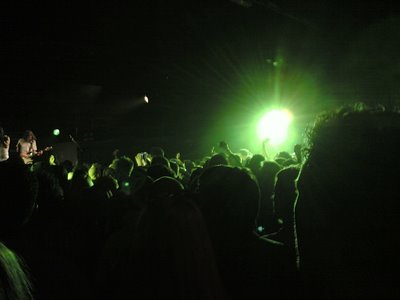 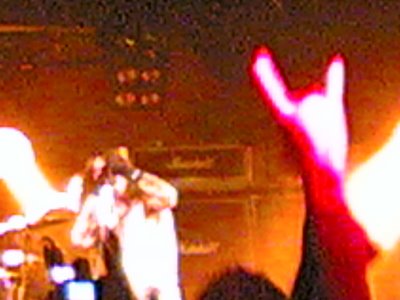 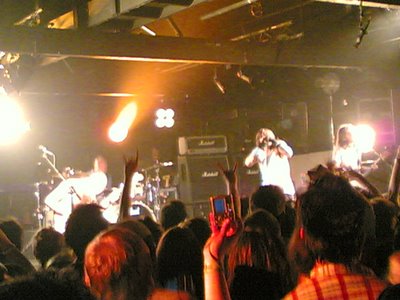 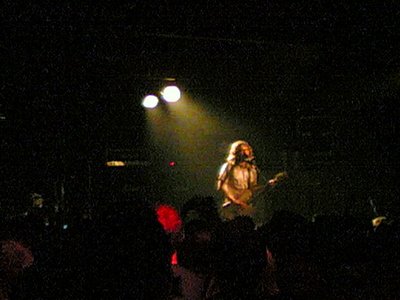 Ray had an actual camera and has much better ones if you discount the one of me… I actually berated him for “spotting” Carmen Elektra shinning over the barrier to get backstage. Fool!

Turned out of course it was her. Sorry. 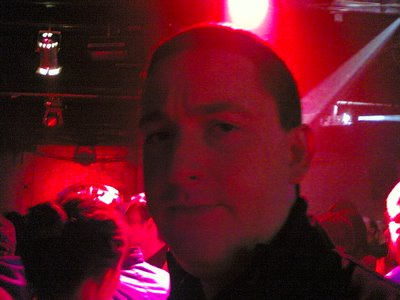 Loads more of what normal people call “celebs” there…. I almost spat at Vernon Kay (I wish no specific ill will towards Tess Daly who was, as usual, glued to him), passed a pocket sized Dermot O’Leary, gawked at Dizzee Rascal posing with fans and saw someone near the end who looked like Rachel Hunter’s mother but who actually turned out to be Rachel Hunter… Oops…

The less said about my noticing the Jennifer Aniston outside the front door who turned out to be some randomer with a tracksuited boyfriend the better.

However my ignoring of famous faces only goes so far and when I’m genuinely in awe of someone then any sense of playing it cool goes out the window. Particulary after whiskey, wine and beer in that order.

Chris Moyles is the current presenter of the BBC Radio 1 breakfast show (the lad in studio to The Feeling’s “Fill My Litttle World” on their current ad running on BBC1). I’ve listened to him on and off ever since I stumbled on him late one night years ago on Capital in London brilliantly berating innocents who chose to call up the show. He is one of the genuine talents of British radio and one of the few people I’ll make an appointment to listen to and, as I wandered off mid-set in search of the toilets there he was standing by a wall, large as life.

I think the only way I got the balls up to go over was that I know he used to come to Ireland as a kid on holidays to visit family and he’s a bit of an Irish radio anorak. I waltzed up, told him who I was, that I used to work for Atlantic 252 and he uttered the words that will stay with me for the rest of my days 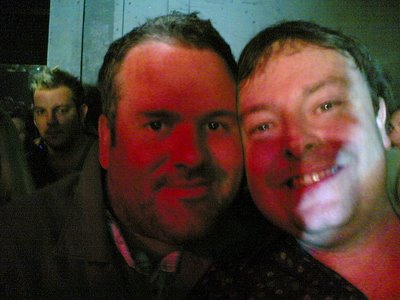 So, were they any good? You feckin bet they were. They were supposed to play a one hour set of new material from the upcoming album but started with Can’t Stop and Scar Tissue and the 500 or so there went apeshit…

They played and hour and a half with a couple of other greatest hits, the new single and a stack of tracks from the new album that sounded great and were all played turned up to 11… You have an awful lot to look forward to at Oxegen.

After they kicked us out (the club was reopening as a roller disco!) and an aborrtive start to the rest of the evening in a club called Egg recommended to us by some randomer in the taxi queue (think the outdoor department of a Woodies DIY where they almost strip search you on the way in playing trance music to about 6 punters!) we were pointed in the direction of The Scala opposite King’s Cross station and stumbled upon the least likely night possible… 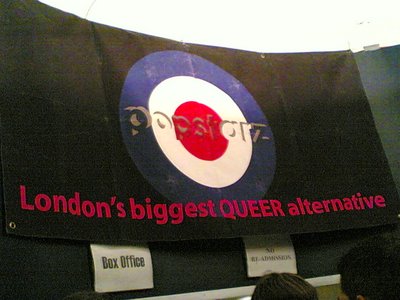 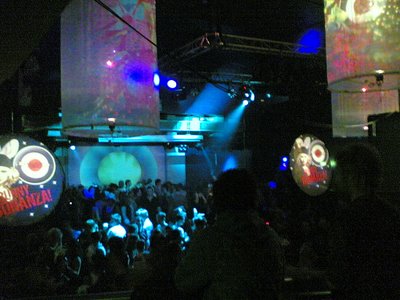 One or two of the more straight laced in our party (pun intended) may have been slightly wary but the slightly inebriated rest of us carried them on in our wake. There was a room doing RnB and at the top of the house a huge room playing The Killers, The Smiths, Franz Ferdinand, Blondie, Placebo…..

There may have been one or two in our party to whom this was a completely new experience but, having a couple of gay friends, I’ve been at nights like this before but, to be fair, none with this much flair, style or great music… Oh, and bunny ears. Lots of bunny ears. And Easter eggs…

Best. Night. Ever. I’d go back in a heartbeat.

As promised, the gig itself is available on the web (but for how long I don’t know!) thanks to our spiritual brothers and sisters at BBC Radio 1 who were there recording the night – check it out HERE

Darren and Laura, I salute you 🙂