Look Who’s Back by Timur Vermes 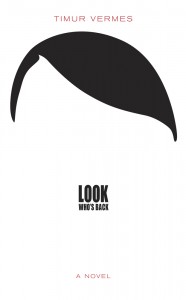 The pitch is simple – Adolf Hitler wakes up on a piece of waste ground in Berlin in 2011 and has to adjust to the modern Germany and the world. People, obviously, mistake him for an impersonator and take his continuation of business as usual as satire. He becomes a TV star…

What could have either fallen very flat or just been plain tasteless is instead really quite funny in places allowing the author to look at the follies and foibles of the 21st century (politicians, reality TV, fashion, people picking up poo after their dogs).

Made me laugh in quite a few places, made me think in others, didn’t outstay the welcome.

Could you ask for more?

One thought on “Book Forty Six”