The Shallows by Nicholas Carr 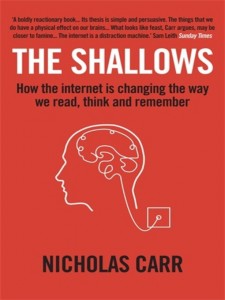 Even though Nicholas Carr published this book in 2010 and so much has moved so much further down the line since then, this is one you have to read.

It starts with how technologies have rewired the human brain since the invention of alphabets, writing, maps and printing (stuff covered on much greater detail in James Gleick’s brilliant book The Information) and then gets into the real meat – how daily use of websites, hyperlinks, Google and the internet in general is changing the way the human race thinks, acts and assimilates what goes on in the world.

I read it, agree with most of it and, as a result, I’ll be using the web less.

If you’ve ever found yourself unable to read a long article without feeling itchy in the brain, find yourself constantly flitting from site to site without really assimilating anything or just been scared by how differently your brain works than it used to before you spent so much time on the internet than switch off everything and read this. Now.