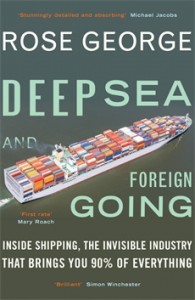 See, this is either going to float your boat (appalling pun apologised for) or it won’t. I developed an interest in the whole topic of the movement of globalised goods a few years back after reading Alain De Botton describing the journey of a tuna fish from the seas around Sri Lanka to a suburban Tesco in the UK, so this one had me at the cover page.

Rose George’s utterly fascinating (to me anyway) account of a 5 week trip from the UK to Singapore through the Mediterranean and the Suez Canal, passing along the pirate-infested coast of Somalia, is much more than just a travelogue. She uses the journey to look at the history of moving goods by sea, how fair it has come over the centuries (from ugly, dirty, busy docks in the centre of cities to hidden, clinical staging areas away from human eyes) and to examine how almost all of the world’s consumer goods are transported (even though we know little about it and care even less).

I was fascinated by the baffling lack of interest the tiny crews on these huge ships have in what they’re actually carrying (she says the crew’s attitudes to the containers are that “…they think they are boring, opaque, blank. Stuff carrying stuff.” She also does more than her fair share of examining the conditions in which crews work, the lack of labour laws and, for some, their disinterest in ever going ashore at all.

Yes, there ere one or two diversion chapters she takes from the main narrative that I felt lost the thrust of the main story, but if you have any interest in the subject matter you should give this a shot.