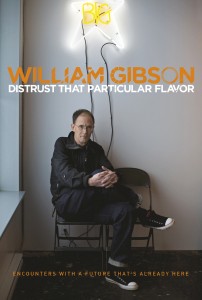 I couldn’t have been more pleased than with this little gem I plucked off the shelf of Easons in Cork a few months back. It’s Gibson’s non-fiction essays dealing with everything from communications to the future of the then-infant internet, collecting vintage watches on eBay to his love of Japan to Steely Dan to “Disneyland With The Death Penalty” (his view of visiting Singapore in 1993).

Imagine someone who writes stuff like this fairly unwillingly (because he claims himself that he’s no good at it) and yet frequently in the course of these “untalented” meanderings opens the hood on the engine of the human race and allows you a look-see under into mechanics of a reality that you had no idea existed.

Yes, some of the pieces are from as far back as the 90s, but, as this is Gibson, nothing in it seems dated. His seemingly impossibly prescient ability to talk about the future just as easily as if he’s talking about the past means everything here is still relevant.

It’s rare I can say that I’ve come away from a collection like this with lenses taken off (or put on, who knows!) my view of life.

His non-fiction is, no less than his fiction, mind-altering.