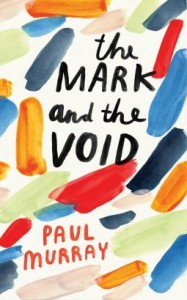 To start with, Paul Murray gives us a good old-fashioned switcheroo for the two main characters in The Mark And The Void. Paul is a brash, crass, money-driven egotistic author years after his first success and failing miserably to come up with his new book. Claude is a principled, quiet, philosophy loving French banker working with the “Bank Of Torabundo” in the IFSC in the months just before the crash in a very thinly fictionalised Ireland of 2008.

Paul turns up one day and suggests to Claude that he’d love to write an everyman story of the banking world “like Ulysses” with Claude at the centre. Claude’s flattered and agrees but soon it becomes apparent that something else altogether is happening.

This happens against the backdrop of a fictional ailing Minister For Finance, a fictional toxic bank dragging down the Irish economy, myhotswaitress.com (with an “S”!), strip clubs, bankers seeing how far they can throw Rolex watches off rooftop bars, cryptic banking giants who communicate in e-mail riddles and dozens of other things that logic tells you couldn’t ever have happened but your gut knows are half a notch off the real world.

It’s pretty much spot on to compare the book to a Celtic Tiger Catch 22, what becomes disconcerting and, later on, nauseating is that in so many places you’re never sure whether behaviour and events you’re reading are genuinely bonkers high farce, insane parody, sharp satire or probably not too far from what actually used to go on in the dying days of Irish banking empire.

Yes, the trope of “Paul the blocked writer” falls squarely within well trodden ground that everyone from Stephen King to Woody Allen has mined but here he uses it like a dizzying series of matryoshka dolls. At one point Paul Murray is writing about Paul the author and all of the staff in Claude’s department who are wondering if, instead of being source material for Paul’s book, they are actually characters in a book being written by Paul the writer.

Ever see the movie Stranger Than Fiction?

The Mark And The Void is one of the most entertaining, mental, nonsensical, politically insightful, page-turning novels I’ve read in a long, long time. Buy copies and give them to people you know who just throw their hands up in the air and say “oh I don’t get any of that whole banking crisis thing” and who, thus, just ignore everything that happened. They’ll end up as furious and angry as I did after the last page. No, I mean it, I was livid at everyone around me for days afterwards.